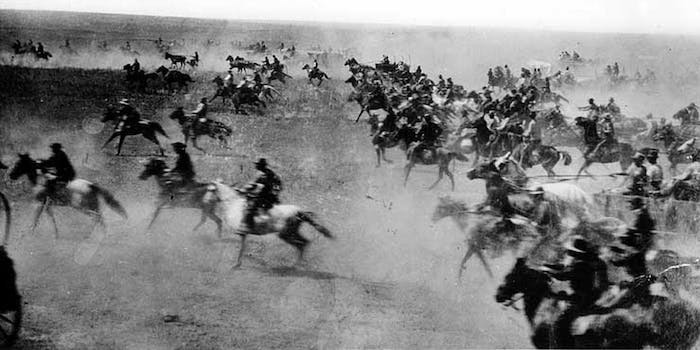 Come Feb. 4, the domain name game is going to be blown wide open. If you have a lot of money, that is.

A little more than a century after the largest land run in United States history, the largest “land” run in Internet history will take place on Feb. 4 when a thousand new domains — old and busted “.com” and “.gov” to new hotness like “.email” and “.basketball” — enter the Internet’s naming system. Finally! I will be able to move my website from www.Brendansucks.com to www.Brendan.sucks.

On Sep. 16, 1893, the General Land Office opened up six million acres — released to them by the Cherokee Nation — in what would become Oklahoma to one hundred thousand settlers who raced each other on horseback to claim the 40,000 parcels of land contained therein. If you made it to a claim first, it was yours — as long as you eventually got around to paying the Land Office, which would then (theoretically, at least) share the profits with the Cherokee Nation.

Other land runs took different forms, but this was more or less the idea. And now the same concept is being applied to the Internet… which is strange, because land is tangible and domain names are not.

The Internet Corporation for Assigned Names and Numbers (ICANN) received 1,930 applications for 1,410 domains. Anyone could have applied, Quartz reports, “so long as they met certain requirements and coughed up a $185,000 application fee.” For those of you keeping score, that’s $357,050,000 of revenue in…application fees.

But it doesn’t stop there! Domains that have multiple applicants will go to the highest bidder. How much do you think “.news” is going to go for? Or “.sex”? What about “.pizza”??

Don’t feel too bad, though. As long as you have the resources to get your hands on one of these domains the profits from owning one are, theoretically, limitless. What a racket!*

Obviously the Internet is a valuable thing, but it’s not the same as actual, physical land — so that’s a big difference. And it also deserves mentioning that there’s no indigenous population upon which to commit unspeakable atrocities at both particular and structural levels. So that’s good!

But what we do have, now, are private entities buying up what essentially amounts to public space and selling it back to citizens who don’t have ungodly amounts of money to spend on letters. As a matter of fact, this should not even enter the realm of public vs. private property because we are talking about a resource (i.e. domains) that have been conjured up out of nothing to begin with! Where there was nothing there is now something, something that ICANN can sell to Google and Apple and Donut and that they can then sell to you. Like I said: what a racket.

1) Come up with a list of politicians, celebrities, and other public figures.

3) Wait for panicked publicity folks to start emailing you.