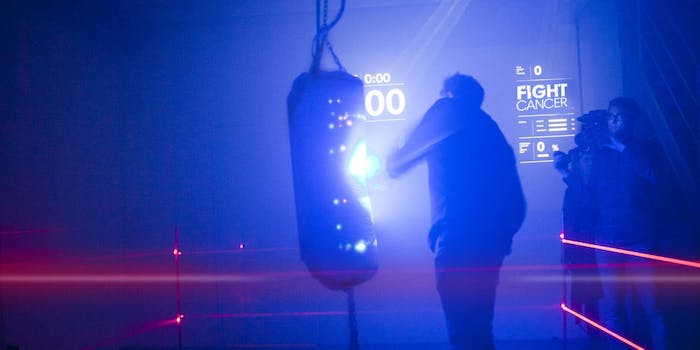 Momma said knock you out.

Cancer sucks and deserves to be beaten into submission at every opportunity. Thanks to a Dutch designer, you can literally take the fight to the disease and raise money for others for those who are locked in their own battle with cancer.

The Interactive Punching Bag, created by Thijs Biersteker, takes cancer out of the body and gives it a physical form that is made to be beat up.

“I’m not a doctor or a scientific genius so when a loved one battled this horrible disease it made me feel powerless,” Biersteker told the Daily Dot. “With this idea I wanted to empower people who are like me. I wanted to make something where everyone could step in the ring and join their loved ones in the battle against cancer. “

The cancer stand-in is equipped with what the designers call “Punch Screen technology,” which utilizes embedded sensors and punchable LED displays to let fighters knock out cancer cells. It’s the result of a collaboration between Biersteker, production agency MediaMonks founder Ubi de Feo, and a team of experimental sound designers at Amp Amsterdam.

Inside the bag are accelerometers that can detect the power of each punch, gyroscopes to record the trajectory of the blow, and impact sensors to register the intensity and location of a hit. That information is processed by Arduino and Raspberry Pi computers, which push the information to the bag’s display and record the data for the website.

The display, which wraps the bag in a pixel grid, utilizes layers of 4230 LEDs to flash layer information for the fighter and show them where the cancer cells are popping up so they can be destroyed.

More than just a cathartic release for cancer-hating hitters, the Interactive Punching Bag also acts as a big, punchable donate button. Each punch delivered to the bag results in a donation to cancer research.

The Interactive Punching Bag personalizes each person’s fight by creating a cancer risk profile. The fighter enters information about themselves, including age, sex, and the type of lifestyle they have. “The idea is to make a donation with every cancer cell you hit, the personal game makes people start hitting the bag more and more, raising money for the cancer research punch by punch,” Biersteker said.

Money raised in fights with the illuminated cancer sack goes to the non-profit organization Fight Cancer—part of the Dutch Cancer Society—to help people successfully knock out the cancer that affects them and their loved ones. The Interactive Punching Bag will tour gyms across the Netherlands, giving everyone who wants one a chance to strike a blow to the disease.