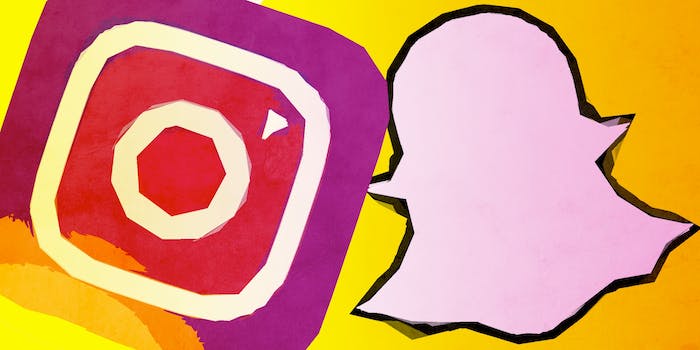 That changed with the recent rollout of Instagram Stories, an almost exact clone of the Snapchat feature that lets users create compilations of photos and videos that disappear after 24 hours. Snapchat’s Stories extended the impact of a single snap by allowing its users to craft longer-lasting narratives out of images, video, and text. Now the same collection of photos and videos from a day at the beach or a protest rally can just as easily go on Instagram as it could on Snapchat. Or both.

Snapchat, on the other hand, is a way to broadcast all the memories that don’t make the final cut (i.e. that pancake that you think looks like Donald Trump, that selfie you took this morning of your new bangs). Snapchat offers a momentary glance at the present, while Instagram captures a rose-colored portrait of the past. 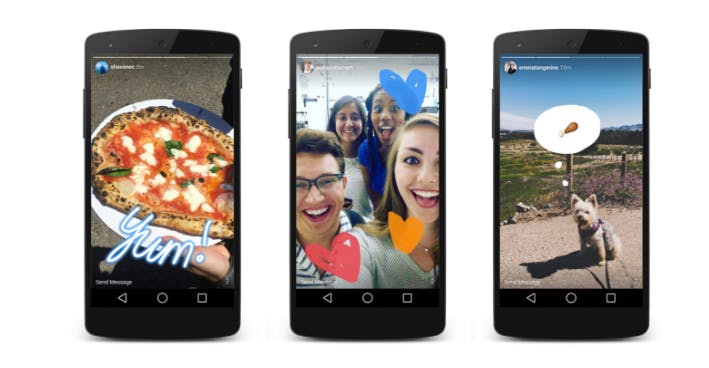 Younger users are drawn to Snapchat for the same reasons older people were once perplexed by it. Snapchat is impulsive, it’s goofy, it allows its users to leave impressions that don’t last more than a few seconds and at most, a single day. Instagram serving up Stories to its users means a larger and broader audience will be able to experiment with a Snapchat-like feature for the first time. Snapchat’s 100 million active daily users still dwarfs that of Instagram, which gets 300 million active daily users per day. While more than two-thirds of Snapchat users are under 25, Instagram is primarily concentrated in the 18-34-year-old age bracket.

In other words, the advent of Instagram Stories means more people will get to write funny meme-like captions on their cat videos: 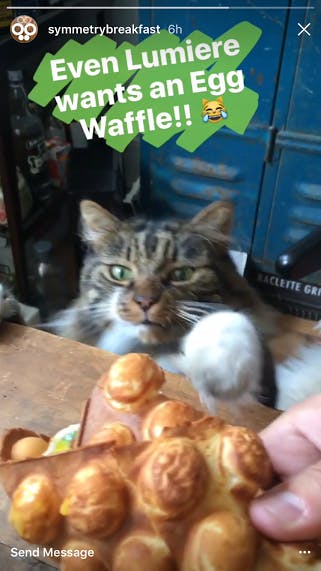 Reaching a bigger, already existent audience is one reason why many brands and news outlets will likely jump on Instagram Stories.

Director of Audience Development at ABC News affiliate WTNH Vanessa Wojtusiak told the Daily Dot that the news outlet is using Instagram Stories because they already have a considerable base on the platform. She’s noticed more brands and publishers embracing Instagram Stories, but she expects it’s due to the tool being so new.

“That doesn’t mean brands should put all of their eggs in one basket with one social platform or feature, however. You have to know your audience, what they expect from you and how they expect to consume it on a service they feel comfortable with,” said Wojtusiak in a direct message.

One factor that could give Instagram’s an edge is its accessibility; many find the platform to be simpler to use than Snapchat. It’s hard to start blind on Snapchat. Snapchat’s interface has very little text and is reliant on swipe navigation. Instagram, on the other hand, has clear labels, syncs with Facebook and your Camera Roll, and walks users through new features. Your mom is likely on Instagram for this reason, and she’ll likely start creating stories for the same reason.

Some are seeing the adoption of stories by the Facebook owned-Instagram Stories as an obvious encroachment onto Snapchat’s territory. Can Instagram Stories kill Snapchat Stories? There are no signs of damage to Snapchat just yet. According to Business Insider, Snapchat usage has not gone down in the two-week period following the launch of Instagram Stories.

“Instagram Stories has not made a measurable impact on engagement since the feature launched,” a spokesman from mobile analytics firm App Annie  told Yahoo Finance.

So Snapchat’s future seems to be safe, at least for now.

Here are the major ways that Instagram Stories is different from Snapchat Stories.

1) You can screenshot on the sly

Screenshots are a taboo on Snapchat. Snapchat users will receive a notification if you take a screenshot of their snap. Instagram offers no such protection to its users, for either stories or their regular posts.

2) No location-based geofilters or vomiting rainbows

A considerable hurdle to goofiness on Instagram Stories is its lack of a counter to  Snapchat Lenses. You can draw on and add text and emoji to photos and videos with Instagram Stories. But that’s basically it.

It’s possible, however, that Instagram is keeping away from geofilters and a Lens-like feature (at least for now) to maintain the company’s image. Instagram is a beautiful world thanks to its photo filters, which often makes images appear more captivating than they actually are. By contrast, things can often get ugly on Snapchat. One dog face lens fueled slut-shaming, and a couple of Snapchat’s lenses have been accused of being racist. Geofilters can be applied sloppily, in bad lighting, or as a way to troll.

bletchley got a super ugly geofilter thanks snapchat pic.twitter.com/m9Y4S6uPhk

3) You can save your stories forever

Yes, a story on Instagram disappears in 24 hours, and Snapchat’s Memories lets you save snaps to a private network. But unlike Snapchat, Instagram offers plenty of methods to leave a more lasting impression. Instagram lets you save your stories to your camera roll and post parts of your story as a permanent post. You can also pause an Instagram story or go back to a previous image.

There’s one major difference in Instagram Stories that could give the older social network a huge advantage over Snapchat when it comes to exposure. Instagram Stories, just like all Instagram posts, are public by default.

That means anyone—even those who aren’t registered users of Instagram—can see your story. According to Instagram, followers can see your story in a row at the top of the feed, and anyone can see it from your profile. Snapchat, on the other hand, only lets you view stories by accounts you follow.