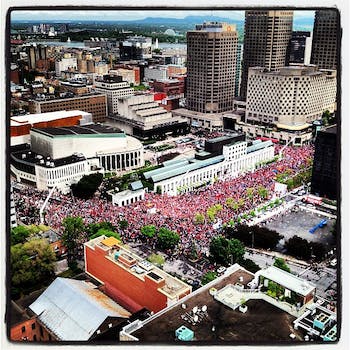 This revolution will be Instagrammed.

Okay, it’s a little premature to call the ongoing protests in Quebec a revolution, but with hundreds of thousands of people marching on the streets of Montreal Tuesday, it certainly felt that way.

Those retaliating against an emergency law aimed at quelling student protests gathered in the city’s main entertainment district, Quartier des Spectacles, before setting off on a five-kilometer march around the city’s downtown area towards a major park.

Though many, many photos taken on were shared using Instagram, the sheer scale of the demonstration was not easy to comprehend on the ground.

However, Instagrammer Phil M was inside a nearby highrise building, and was able to snap some images showing the crowds. One of his photos, captioned “That’s a lot of people,” showed some of the masses gathering ahead of the march’s commencement.

The river of red coursed through Montreal, and it was thanks to Instagram that we saw it more as a massive delta than a stream.