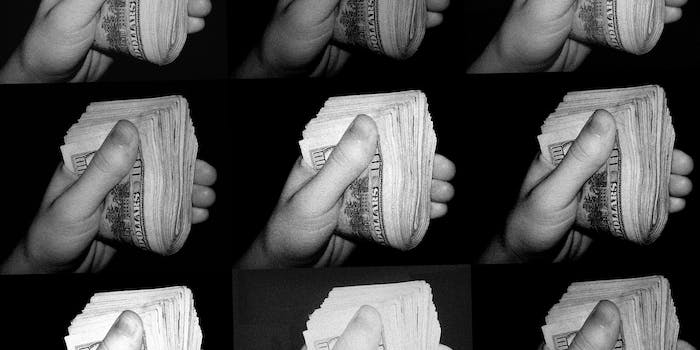 Instagram can make almost anyone look like a decent photographer. But what are the odds of actually turning your filtered photos into a paycheck?

It’s difficult—but not impossible. While there’s no direct purchase button on the site, a number of individuals have found success in a way that looks almost effortless.

Daniel Arnold, a New York-based photographer, earned $15,000 on Instagram in March. At the time, he was “between classifications,” as he put it, and had already had a large audience on the platform, 22,000 followers (now more than 50,000). Looking for a way to pay his rent, he left a message on his Instagram profile:

“Hello, I just turned 34 this second. For one day only I am selling 4×6 prints of whatever you want from my Instagram archive for $150 each. […] If you’re interested, send a screenshot of the photo(s) of your choice to [email protected] (one d) and I will send a paypal invoice, followed by a signed print. Easy peasy. Happy my birthday. I love you”

His fans returned his love immediately. As he reported to Forbes, the flash sale not only netted him $15,000 in a day, it created the exciting idea that Instagram could be used to earn money and respected by professional photographers.

But it’s not as easy as slapping a price-tag on your Insta-snaps. If you want to make it big on Instagram, there are a few things that have to be accounted for.

It should go without saying that you need a sizeable following. It gives you credibility and increases the number of people who will see your work.

For users with no professional standing, there is the opportunity to work together with companies through the dark art of product placement. There’s some contention around the practice of companies targeting social media users for advertising, which basically boil down to two points. The first is the longstanding fear that users are less genuine if they’re being sponsored.

The other problem is that companies could easily offer low amounts of money to naive photographers who don’t realize their work has real value.

Agencies like Tinker Mobile, Seen, and Snapfluence  are now cropping up to bring a dose of formality to professional interactions on Instagram, serving as the bridge between photographers and potential clients.

There’s also the possibility of licensing your Instagram photos. Benji Lanyado is the founder of Picfair, an images marketplace that just raised $520,000 in funding. He says mobile images now make up about 5 percent of the company’s library, and photos sell for anything from a couple of dollars to over $50.

Even if only 0.01 percent of those images were fit to market, as Laynando noted, that would more than double the global image stocks.

“The exclusively ‘pro’ agencies who exclude amateurs/mobile shots like Shutterstock are like King Canute trying to hold back the tide,” Lanyando added, “constricting supply in an age of abundance.”

EyeEm, “the Instagram of Europe,” recently announced a partnership with Getty to license its mobile photography for use as stock images. It’s not only creating a new commercial avenue for mobile photographers, but it’s a sign traditional photo-marketers are looking at mobile photography as a real commodity. In a couple of months, EyeEm is also launching its own photo marketplace, which will compete with companies like Getty and Picfair.

“We want to create a photography marketplace for the ‘generation smartphone,’” EyeEm PR manager Sven Schubert said. “Image buyers will now have access to places, topics and events which were not available before.”

The world is waking up to mobile photography as a prospering and lucrative market. Over the next few years, we can expect Instagram to be able to support more professionals who can use the platform as a direct way to make money.