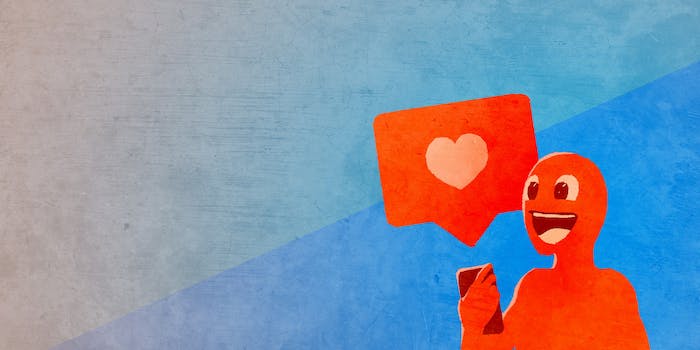 Practice safe Instagramming, and always use a filter.

The findings of a study conducted by the University of California, Los Angeles has many people comparing “likes” on social media to sex, but don’t dismiss teens as thirsty for social media attention so quickly.

The research, published in the journal Psychological Science, found that in the developing brain of teenagers, “likes” were found to generate activity in the regions of the brain that are involved in sensing pleasure—the same areas that light up with thoughts of sex, money, and food.

Conducted with a small sampling of 32 teens between the ages 13 to 18, the researchers told the social media savvy millennials they were taking part in test of a small social network. The program was modeled after Instagram, designed to examine just how influential the heart-shaped “like” button is on the minds of the high schoolers.

The experiment, conducted by UCLA researchers, called for the teens to add their own photos to the platform, which were published alongside other photos that ranged from the relatively bland images to ones that were associated with more risky behavior, like smoking marijuana or cigarettes.

Those images—about 150 in total, including the subjects’ own contributions—were then placed in front of the test subjects, along with a “like” counter that showed how popular each picture had been with others who saw it. Those pictures that already received a lot of likes—even if they were mundane images—were more likely to trigger the parts of the brain that are involved in “reward processing, social cognition, imitation, and attention.” The effect only increased when it was their own photos gathering likes.

The findings of the study have been construed as teens processing likes in the same way they do sexual stimulation—an understandable interpretation as teens apparently aren’t having sex and it’s easy to assume that the generation with their heads glued firmly to smartphone screens derive some sort of eroticism out of collecting likes and favorites.

Lauren Sherman, the paper’s lead author, told the Daily Dot that she understands the desire to compare the brain response to likes to sex or chocolate for the sake of a “punchy headline,” but wouldn’t go quite as far as to say the pleasure is the same.

“That isn’t something our neuroimaging tools can tell us—only that some of the same brain regions are involved,” she explained. “I think it’s fair to say that the neural circuitry involved in receiving ‘likes’ is also involved in the experience of many sorts of pleasure.”

While the comparison to sex might grab attention, Sherman said there was another takeaway from the research that was more important: she found that the “reward circuitry” regions of the brain are involved not only in feelings of pleasure, but also in “learning and motivating future behavior.”

“My hypothesis is that likes don’t just feel good in the moment; rather, they may be guiding teens to learn how to behave in the future in order to fit in with peers,” she explained.

Interestingly, that pressure doesn’t necessarily lead to partaking in “negative” behaviors, as evidenced by the fact that the kids in the test group reacted positively to the plainest of images as long as they had likes. They reacted similarly but to a lesser extent when popular images of riskier activities were shown.

But Dr. Pamela Rutledge, director of the Media Psychology Research Center, drew a similar conclusion to Sherman upon examining the research. “The study very reasonably points out that adolescents are in a developmental period where self-presentation is very important,” she told the Daily Dot. This leads to teens viewing the opinions of their peers very highly, and getting likes is like getting approval.

She, like Sherman, believed the more interesting part of the findings revolved around the confirmation that social media is processed by the brain similarly to in-person social reactions and can create a sense of peer pressure.

“It also highlights the way teens translate quantitative information, such as ‘likes’ into qualitative and subjective emotions to indicate affiliation and social acceptance—primary drivers of teen motivation,” Dr. Rutledge explained.

While the study didn’t directly compare online and offline data, Sherman said the study “demonstrated that these quantifiable ‘likes’ do affect how teens experience and react to online information,” and she remains interested in drawing a more direct comparison between the types of interactions her in future work.

According to a study conducted by Common Sense Media, teens spend a whopping 9 hours a day on social media services. While that figure may be staggering, it’s worth noting that much of social media is a relatively new phenomenon and the current generation is one of the first to grow up with the services immediately available in their lives. The feedback provided through notifications may well just be a different manifestation of the same influence other generations received in face-to-face interactions.

Another area Sherman plans to explore further is finding out if the pleasure of likes is felt those who haven’t grown up solely in the age of social media. She plans to attempt to quantify the effects of social media interaction in adults in a follow-up study, but theorizes that the developing teen brain may make them ripe for feeling the influence of online interactions.

“We saw that our teen participants showed activation in reward-related brain regions when they received a lot of likes on their photos, and some of these brain regions are thought to be especially sensitive in adolescence compared to adulthood,” she said. “It’s possible that one of the reasons teens are such active users of social media is that their brains are especially sensitive to online social feedback.”

From Twitter’s controversial decision to swap out its star icon for a heart, some insight about the power of the symbol for a more general audience can be found. Research conducted by social-media analytics firm Locowise found a 28-percent jump in the use of the button once it changed to the heart.