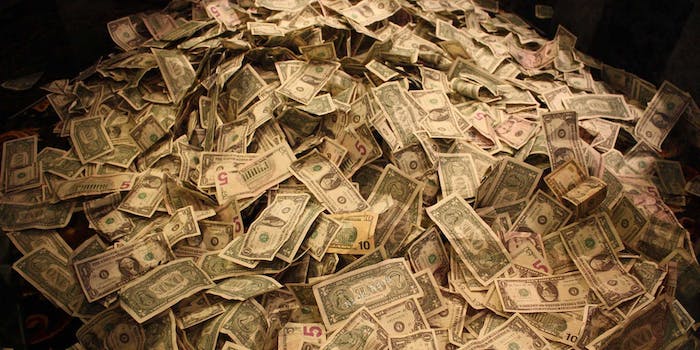 And you thought your uploads were precious.

Instagram ads still relatively new to the network. Campaigns were launched at the end of 2013, and only with a handful of partners. Slowly but surely, their ilk are growing, and you are likely starting to see more of the stuff in your feed.

Still, they are far and few between, and ads—or sponsored posts, as they’re referred to in the app—are hugely outnumbered by photos of your friends dinners/vacations/puppies.

Despite the fact that Instagram ads are taking their good sweet time and only show up every so often, they are very, very expensive. According to an AdAge report, Instagram is pitching its advertising platform, and a month’s package could cost a brand “deep into six figures and verging on seven depending on the reach and frequency sought.”

One executive briefed on the ad product said a month-long buy could end up costing $500,000, while another quoted pricing just south of $1 million for that period of time. A third put the lower end of monthly pricing at around $350,000 to $450,000 with the higher end south of $1 million, while noting that no range has been set in stone. Instagram doesn’t have a rate card, and CPMs are based on factors like targeting (gender and age are the only parameters now available), reach and frequency.

Instagram recently added Taco Bell to its short list of ad partners, and many users saw the Fourth Meal purveyor’s first spot show up last week. Of course, you may not have noticed the ad—which is precisely the reason why Instagram ads are proving so valuable.

Native advertising is not new—promoted tweets and Facebook’s sponsored stories were introduced a long time ago (in Internet years, at least). But neither have seen the type of success Instagram has: A recent study found promoted tweets don’t capture our attention, and we all know how the sponsored stories fiasco went down (if you don’t, here’s a summary: not well).

If you think a seven-figure investment for uploading a photo and slapping an Amaro filter on it is crazy, you’re definitely sort of right. At its most basic, this ad campaign is letting a brand do exactly what you do with the app. There is nothing different about the technology they’re employing to post that photo (except I’m guessing they rely on professional cameras and editing software to perfect it). What they’re paying a million dollars (or more) for is Instagram’s targeting system, which makes their post show up in your feed, regardless if you follow them or not.

And now that Instagram has 200 million monthly active users (coincidence that the new MAU numbers were announced around the same time this ad platform pitch is happening? Nope!), it’s a ripe time to expand and add more partners.

The risk is what it’s always been. If ads start to overwhelm users—if they surpass their current barely noteworthy status—then users might start readying their pitchforks. But all signs indicate that Instagram is happy to bide its time, frog-boiling us a bit so we don’t cry foul but at the same time become more comfortable with the ads.