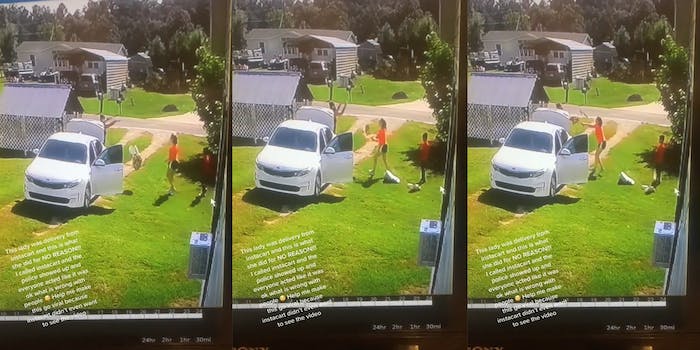 A user on TikTok went viral after claiming that her Instacart shopper threw her groceries at her unprovoked.

Furthermore, user Caitlin Scott (@rusticboutique97) says Instacart did not immediately respond to her complaint, saying that it “didn’t even want to see the video.” The Daily Dot reached out to Instacart via email.

Scott’s first video on the incident, posted earlier in the week, currently has over 1.5 million views.

@rusticboutique97 Polk county help me out !!! This is not okay for someone to act this way PERIOD! @Instacart #ItsGreatOutdoors #fyp #polkcounty #sheriffgradyjudd ♬ original sound – Caitlin Scott

“This lady was delivery from instacart and this is what she did for NO REASON!!!” Scott wrote over a video that claims to show an Instacart worker throwing her groceries at her. “I called instacart and the police showed up and everyone acted like it was ok what is wrong with people.”

In the caption, Scott said the incident took place in Polk County, Florida.

In a follow-up video, Scott claims she “didn’t do shit to her for her to act like that.”

In fact, the only interaction Scott claims they had prior to the Instacart delivery driver’s arrival was a brief call about a product exchange, which Scott says she approved.

When the delivery driver arrived, Scott says she was standing in her yard and signaled for the driver to come, as the driver passed by her house several times.

After the driver pulled up, Scott says she got out of the car and cussed Scott out, saying that she needed to “update [her] fucking delivery instructions.”

Scott says she responded by telling the driver she did not need to update her instructions as no other driver had expressed difficulties finding her house.

This allegedly set the woman off. Scott says that as she and her son approached the car, the delivery driver threw the family’s groceries at them, with Scott responding by throwing one of the bags back at her.

Scott claims in her video she planned on giving the driver a cash tip, which ended up being thrown at her along with the groceries.

In the comments under a later video, she claims that she was not the person who called the police.

She then posted the limited interaction she and her driver had prior to the dispute.

While Scott claimed Instacart was not initially interested in seeing the video, Scott revealed in an update that Instacart reached out to her.

According to a screenshot she shared, Instacart said, “Hi Caitlin! We would like to investigate the situation with your shopper. Can you provide the name, email, and phone number associated with your account?”

Scott is seemingly trying to move past the incident, turning off the comments on her videos and posting a promotional video for her webstore as “the only Update i’m giving.”

TikTokers used the still-open comments section on her latest video to share their thoughts on the incident.

Some were suspicious, accusing Scott of not telling the whole story.

“Feel like you did something and because you keep disabling comments it’s super sus,” one user wrote. “Also now your promoting ur company.”

“We all know you did something to Initiate that,” another claimed. “you got what she deserved.”

However, many commenters supported Scott, offering reasonable explanations for her actions.

“Idk why people are assuming you did something bc you’re disabling the comments,” a user shared. “Like maybe you didn’t want your phone blown up…”

“From what we can see, u did nothing wrong, would say post the audio from the camera if u can. Other then that Driver is in the wrong,” a second user added. “Doesnt matter – tip or not, a job is a job.”

In response to critics, Scott posted a video that shows her and her son getting out of their car. “We already outside. … We wasn’t waiting for her,” Scott says, narrating what she says is happening in the clip.

In addition to Instacart, the Daily Dot reached out to Scott via TikTok comment and the Polk County Sheriff’s Office via email.