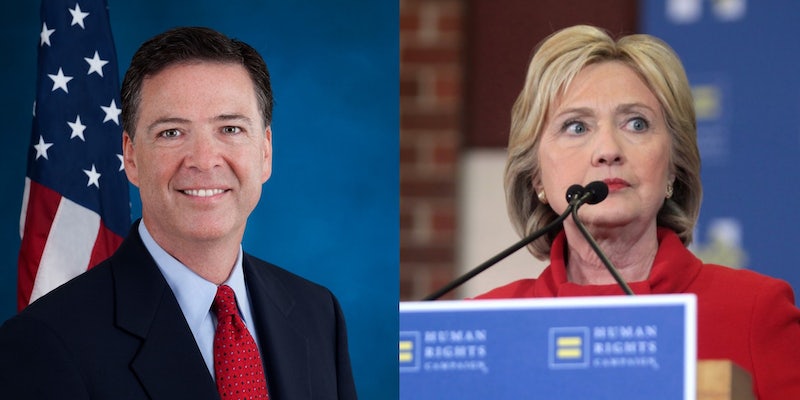 The U.S. Department of Justice inspector general’s office said Thursday it would open an investigation into letters written by FBI Director James Comey regarding Hillary Clinton‘s emails that may have affected the outcome of the 2016 presidential election.

The inspector general’s office said the wide-ranging investigation comes in response to concerns from members of Congress who believe actions by the FBI and the Justice Department during the 2016 election season may have been motivated by politics, the New York Times reports.

In addition to the Comey letters, DOJ Inspector General Michael Horowitz will also investigate whether FBI Deputy Director Andrew McCabe, whose wife ran as a Democrat for a seat in the Virginia State Senate, should have recused himself from the FBI investigation into Clinton’s use of private email system during her tenure as secretary of state.

Lawmaker concerns focus on a pair of letters written by Comey and sent to members on Congress. The first Comey letter, sent on Oct. 28—just 11 days before Election Day—informed members of Congress that FBI investigators had discovered emails that may have been pertinent to the bureau’s investigation into Clinton’s emails. Comey said investigators would “review” the emails to find out if they contained classified information.

Investigators had discovered the emails on a laptop used by Clinton aide Huma Abedin during an FBI investigation into her husband, former New York Rep. Anthony Weiner, who allegedly sent sexualized messages to an underage girl.

The vague letter sparked a flurry of news reports and speculation that Clinton or her staff may still be prosecuted for improperly handling classified information—a matter the FBI initially put to rest months prior. Many inside and outside government criticized Comey for sending the letter, which they said violated decades of DOJ protocol.

Ultimately, Comey sent a second letter stating that the emails contained nothing new.

Polling shows renewed attention on the emails contributed to a collapse in support for Clinton less than two weeks before the Nov. 8 election and may have led to her defeat by President-elect Donald Trump.