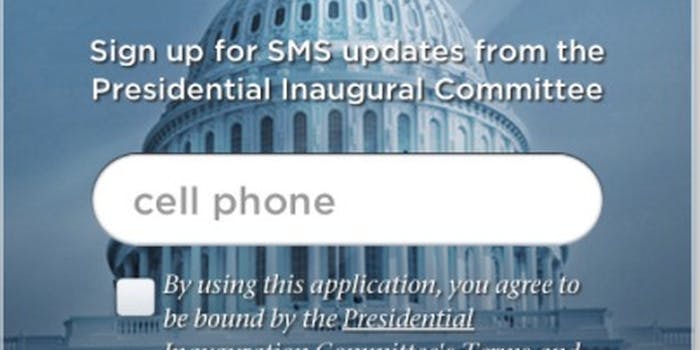 Some believe Obama is prepping Biden for a 2016 run.

For the first time in American history, there is an app for the presidential inauguration on Monday, Jan. 21, when Barack Obama is sworn in for his second term.

Launched this week by the Presidential Inaugural Committee, the free iPhone and Android app has ticket information, a schedule of events, and even maps to the closest bathroom. It also has easy ways to share what people are seeing and hearing on Monday by connecting the app to both Facebook and Twitter.

But if you think the inaugural committee is just trying to be helpful, think again. Steve Friess of Politico reported this week that when people download the app and enter their basic information—name, number, email, address, etc.—that that data might be shared “with candidates, organizations, groups or causes that we believe have similar political viewpoints, principles or objectives.” You would only know that if you read the terms of service, and let’s be honest, who does that?

The terms of service go on to say that anything posted with the app could be used in fundraising and advertising for the Democratic party without notice. Needless to say, it surprised some people, including Kathy Kiely of the Sunlight Foundation, a group dedicated to openness in politics.

“It seems like classic bait-and-switch,” Kiely told Politico. “This is a committee that’s formed to throw a celebration for an event that should be nonpartisan. Theoretically, the whole country should be involved. It’s a patriotic, banners-and-bunting and parades kind of day. And oh, by the way, if you use this app, we may be harvesting your emails and sharing it with our friends in the Democratic Party.”

Of course, using apps for political gain is nothing new. Both Obama and Mitt Romney’s campaigns engaged in a sort of “apps arms race” last summer (although Romney’s “Amercia” was a miss).

So who might benefit from such a data grab? What candidate might “have similar political viewpoints, principles or objectives?” Well, none other than the second guy getting sworn in this coming weekend. Joe Biden has been making a name for himself recently, most notably heading up the White House’s push for gun control, and some believe the President is prepping his No. 2 for a 2016 run.