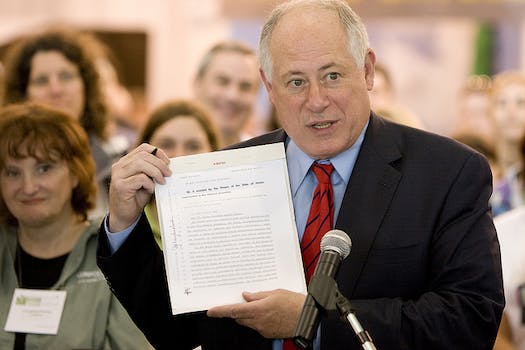 Earlier this week, Illinois became the second state after to pass a law that makes it illegal for employers to demand the passwords of online profiles for current and prospective employees. The new legislation will take effect on Jan. 1, and it states that employers could be penalized between $100 and $300 in civil court should they be found guilty.

“We’re dealing with 21st-century issues,” Illinois Governor Pat Quinn told reporters during the bill-signing. “Privacy is a fundamental right. I believe that and I think we need to fight for that.”

Maryland passed a similar law back in April. California lawmakers have proposed an analogous measure as well. At the federal level, Representatives Eliot Engel (D-N.Y.) and Jan Schakowksy (D-Ill.) have introduced the Social Network Online Protection Act (SNOPA), which would make employers subjectable to a fine of up to $10,000, should they force their employees to divulge their passwords.

It’s important to note that Facebook’s terms of service already prohibits individuals from giving their password to anyone. From the social network’s Statements of Rights and Responsibilities:

But how prevalent is that practice?

Not very. The only notable instance where an employer forced an employee to give up his or her Facebook password was the case of Robert Collins, a corrections officer with the Maryland Department of Public Safety and Correctional Services. The American Civil Liberties Union (ACLU) stepped in for Collins and filed a civil rights suit on his behalf.

What these laws fail to do is prevent employers from looking at a prospective applicant’s social media presence as part of a background check, which according to Lorie Andrews,
a professor at the Chicago-Kent College of Law, 75 percent of all employers do.