IHOP typically serves up piles of flapjacks and bacon on Sunday mornings, but today its Twitter account added an unwelcome garnish of political commentary. 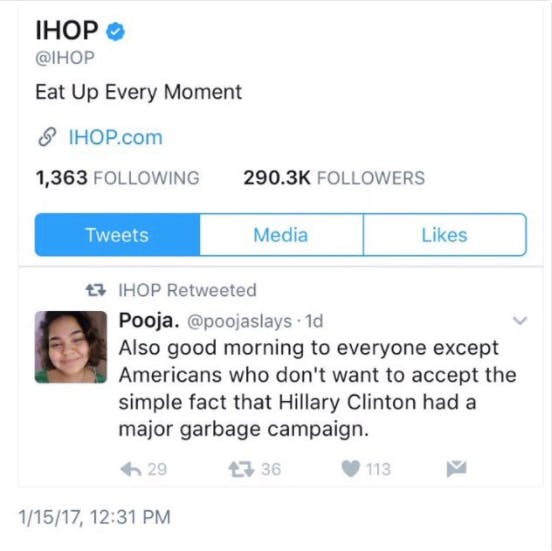 After investigation, we have confirmed that our account was hacked this morning. We appreciate our fans bringing this to our attention.

IHOP followers noticed the inexplicable retweet soon after it was posted and attempted to make head or tails of what it meant. Some questioned the legitimacy of IHOP’s hacking claim, because it seemed odd for hackers to break into an account for a single retweet. Others took aim at the political sentiments, interpreting the retweet as affirmation of Bernie Sanders support or socialist leanings.

It was a good tweet and you should feel good.#BernieWouldHaveWon

In an unlikely move, IHOP reveals the I is for Internationale. pic.twitter.com/VlvxHxfDSN

Poojaslays, meanwhile, seems to be just as confused about the situation as everyone else. She’s not American and doesn’t support any American political party, despite the flood of Americans interpreting her views as pro-Sanders or even pro-Trump.

What she does support is revolutionary socialism and helping Caribbean kids go to school.