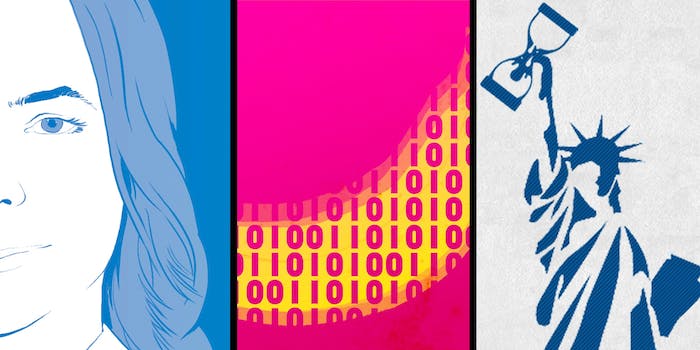 Clemency for Chelsea Manning, a teledildonics lawsuit, and even more Pokémon malware: ICYMI

Important news you may have missed on Thursday, Sept. 15

Julian Assange declared on Twitter that he’d be willing to enter American prison if Chelsea Manning were released from Leavenworth. Manning, a transgender woman diagnosed with gender dysphoria by the U.S. Army, is serving the remainder of a 35-year prison sentence for leaking sensitive government files to WikiLeaks. She’s also currently facing new charges stemming from a suicide attempt two months ago. It’s unclear whether Assange’s offer is going to receive any serious consideration by the U.S. government.

A malicious app cleverly titled “Guide for Pokémon Go” (it’s really genius) was downloaded more than half a million times before it was pulled from the Google Play store. Infection was not guaranteed, Kaspersky researchers said. For those whose phones were infected, the Trojan waited for two hours before downloading and installing additional malware modules. Pro tip: Quit downloading Pokémon apps.

The movement to pass a law mandating security backdoors for law enforcement be built into consumer products is losing steam in Congress. Rep. Michael McCaul (R-Texas) on Thursday called it a “simplistic solution to a very complicated problem.” McCaul has proposed the formation of a national encryption commission—a plan supported by Hillary Clinton.

The family of Sandra Bland has settled its wrongful death lawsuit against the state of Texas for $1.9 million. Bland, 28, was found dead in a jail cell in July 2015. The case drew national attention after the findings of a medical examiner, who believed Bland committed suicide, confounded and incensed friends and family members who claimed Bland would have never taken her own life.

Finally, there’s a lawsuit against a teledildonics company claiming it hid knowledge it collected information about the users of its teledildos. Fuckers.

The greatest map of America you’ll ever see. —via Seth Stevenson, Slate

Comedians are ditching even the appearance of balance in the 2016 election. A look at the new politics of late night in the post-Jon Stewart era. —via Richard Zoglin, Time