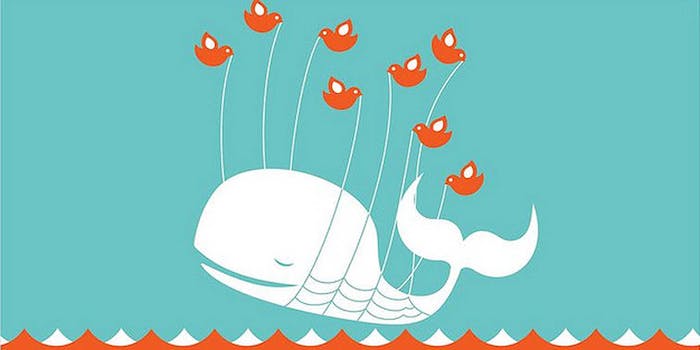 Twitter has revealed that IBM accused it of infringing 3 patents.

With Twitter’s initial public stock offering set to make a big debut later this week, it seems IBM thinks now is the perfect time to come after the social network for allegedly infringing its intellectual property.

Twitter has filed a document with the U.S. Securities and Exchange Commission revealing that IBM recently accused it of infringing on three patents.

Though IBM has yet to pursue any formal legal action, the S-1 Amendment filed by Twitter reports that IBM invited them “to negotiate a business resolution of the allegation.” IBM has a reputation for using its wide stable of technology patents to force other tech companies into lucrative licensing agreements. As one of the oldest tech companies still in existence, IBM has the benefit of holding patents on a number of ideas and products developed by research that predates the modern Internet.

The IBM patent licensing machine has grown so enormous that its been able to rake in as much as $2 billion in a single year, according to Ars Technica. The company’s been willing take on major online players like Amazon, which it sued for patent infringement in 2006 and won an out-of-court settlement from the following year.

In this particular instance, IBM accuses Twitter of violating three patents: U.S. Patent No. 7,072,849 regarding a “method for presenting advertising in an interactive service;” No. 6,957,224 regarding the “efficient retrieval of uniform resource locators;” and No. 7,099,862, regarding the “programmatic discover of common contacts.”

These patent threats seem to have little impact on the course of Twitter’s IPO, which is still estimated to debut at $23-25 per share, up from an earlier estimate of $17-20. In the amendment filed with the SEC, Twitter executives projected confidence about the looming prospect of a patent battle with one of the biggest names in the game.

“We believe we have meritorious defenses to IBM’s allegations, although there can be no assurance that we will be successful in defending against these allegations or reaching a business resolution that is satisfactory to us,” the company wrote.

When it comes to patent holdings, Twitter is like the David to IBM’s Goliath. Twitter has just nine granted patents to the thousands held by IBM. The social network, which has been less guarded about patents in its quest to remain developer-friendly, admits a certain naiveté in this area. The company acknowledges that it thus faces patent threats from other parties beyond just IBM.

“Many companies in these industries, including many of our competitors, have substantially larger patent and intellectual property portfolios than we do, which could make us a target for litigation as we may not be able to assert counterclaims against parties that sue us for patent, or other intellectual property infringement.”