Camerawoman caught on video tripping a refugee carrying a child

As many as 180,000 refugees currently reside in Hungary.

A video making its way around Twitter on Tuesday shows a camerawoman in Hungary tripping a refugee who is carrying a child.

A woman holding a video camera in the video, who is seen dressed in blue and wearing a white surgical mask, appears to stick her foot out and trip an older man carrying a small child in his arms. The man tumbles to the ground and lands on top of the child.

The video, tweeted out at roughly 8am ET by Munich-area reporter Stephan Richter, was reportedly shot near the Hungarian town of Roszke, where refugees—mostly from Syria, Afghanistan, and Iraq—have been living in a holding camp along the Hungary-Serbia border.

Here is a longer version of the video, via Index.hu:

The Hungarian news website 444.hu reported that the woman, identified as Petra László, is herself Hungarian and works in television. The Daily Dot has been unable to independently verify her name or occupation thus far.

According to the Telegraph, László was a “reporter for the local TV station N1TV (the company dismissed her after the video surfaced), which is run by the anti-immigration far-Right Jobbik party.” The child in the video was identified as a little boy. László was also captured kicking a little girl. 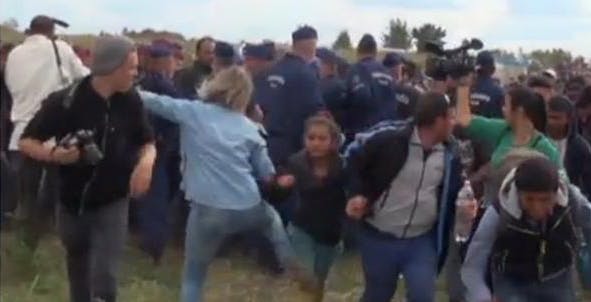 N1TV issued the following statement: “The N1TV colleagues today behaved unacceptably in Roszke collection point. Our working relationship with the camerawoman has ended. The case was considered closed our part.”The refugees seen fleeing from police had reportedly complained about the conditions in the camp and the lack of information provided by authorities. Desperate scenes captured in Roszke by international press show hundreds of tents inside of a cornfield surrounded by policemen in blue uniforms. 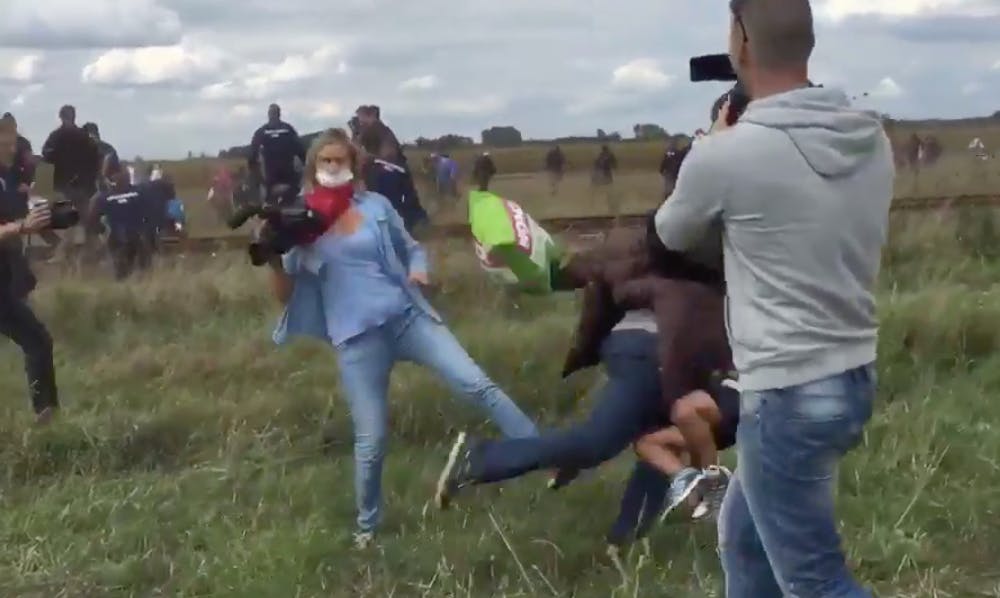 As many as 2,700 new refugees entered the Hungary on Monday, according to reports, bringing this year’s total to around 180,000 people. Many of them, arriving from Serbia after traveling through Turkey, are attempting to cross Hungary on their way to Europe’s western countries.

The German government, which has urged other E.U. nations to open their doors to those fleeing war-torn nations in Africa and the Middle East, announced on Tuesday that it intends to spend an extra €6 billion ($6.7 billion) to help house the some 800,000 refugees expected to enter the country this year.

Nearly 20,000 refugees arrived in Munich this weekend. Sigmar Gabriel, deputy to German Chancellor Angela Merkel, told reporters on Monday that the country would be able to take in as many as “500,000 refugees a year for a few years.”

Update 5pm CT, Sept. 8: Added additional information about the incident, including the dismissal of László and the statement of her former employer, N1TV.

Update 9:20pm CT, Sept. 8: Full video embedded; removed “allegedly” from the first sentence due to confirmation of the incident from multiple parties.