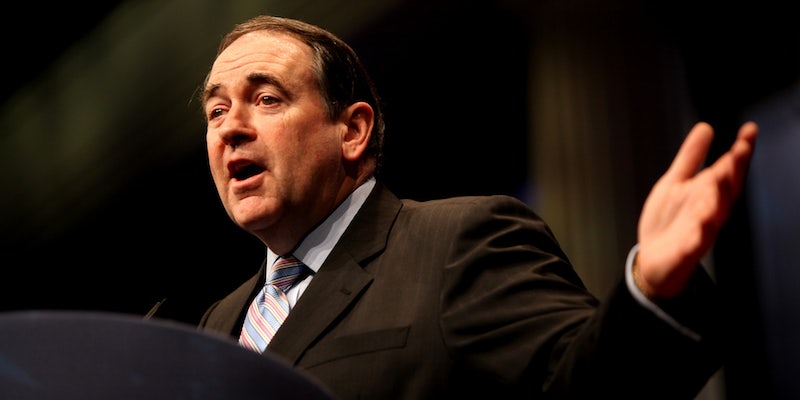 According to Republican presidential candidate Mike Huckabee, a court ruling that black Americans are not citizens, which was overruled in 1868, is “still the law of the land.”

The Supreme Court’s 1857 ruling on Dred Scott v. Sandford, widely considered by scholars to be the worst in the court’s history, found that Scott, who was born a slave, could not sue for his freedom even when brought to a free state, as neither he nor any black American were citizens, even if they were free. It was overruled by the 14th Amendment to the Constitution.

But Huckabee seemed to miss that in defending Rowan, Kentucky county clerk Kim Davis’s decision to defy the Supreme Court while refusing to issue marriage licenses to gay couples.

In an interview conducted with radio host Michael Medved and published online by BuzzFeed, Huckabee talked about the public debates he’s engaged in over the legality of Davis’s actions.

Medved immediately corrected Huckabee and asked if a constitutional amendment could be an option for Davis’s cause.

“I don’t think that’s necessary,” the former governor argued. “Because, in the case of this decision, it goes back to what Jefferson said that if a decision is rendered that is not borne out by the will of the people either through their elected people and gone through the process, if you just say, it’s the law of the land because the court decided, then Jefferson said, ‘You now have surrendered to judicial tyranny.’”

The Huckabee campaign didn’t respond to requests for comment in time for publication. We’ll update if and when we hear back.