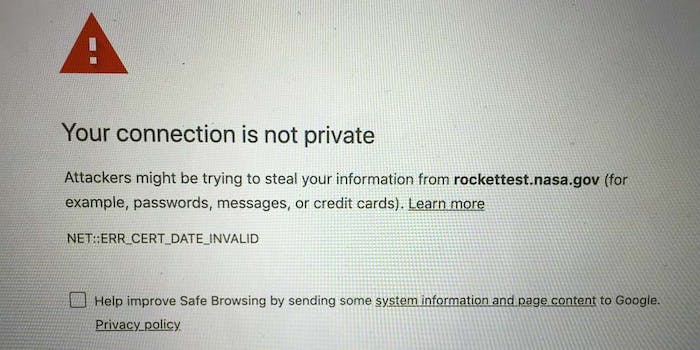 Numerous government websites can no longer be accessed by the public after their HTTPS certificates expired during the government shutdown.

Those certificates, which allow your connection to the website to be encrypted, help to ensure that no one can alter your data or the website you are visiting.

As noted by U.K.-based internet security company Netcraft, many government websites, including those belonging to “NASA, the U.S. Department of Justice, and the Court of Appeals” have suddenly become “insecure or inaccessible.”

“With around 400,000 federal employees currently furloughed, more than 80 TLS certificates used by .gov websites have so far expired without being renewed,” Netcraft writes. “To compound the situation, some of these abandoned websites can no longer be accessed due to strict security measures that were implemented long before the shutdown started.”

Netcraft argues, however, that despite the inconvenience, the incident shows that many modern browsers, which either restrict access to websites without proper certificates or issue warnings, are working as intended.

“While this behaviour is bound to frustrate some users, in this case, security is arguably better than usability when you can’t have both,” Netcraft adds. “If users were to ignore such warnings, they would be vulnerable to the type of man-in-the-middle attacks that TLS certificates were intended to combat.”

Although many sites appear to be affected by the issue, others are immune to the certificate expiration problem.

TechCrunch’s Zack Whittaker reports that government sites hosted on “cloud.gov, search.gov or federalist.18f.gov” are set up to renew their certificates automatically every three months.

The certificate fiasco comes as President Donald Trump demands Democrats approve a budget with $5.7 billion dollars allocated for a wall on the U.S.-Mexico border. The partial shutdown, which entered its 21st day on Friday, is currently tied for the longest ever lapse in government funding.