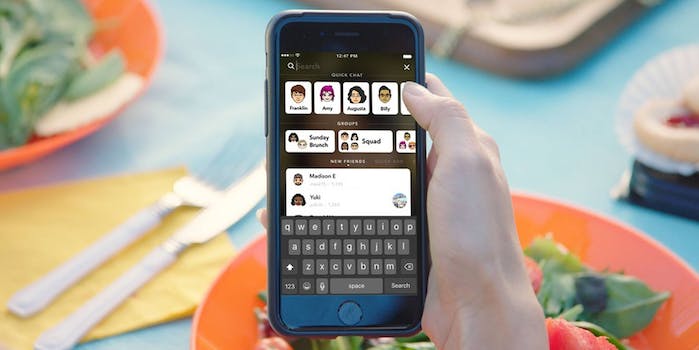 The interface is reportedly 'designed for speed.'

Snapchat is growing up. In its latest update, currently live to users of its beta Android app and rolling out to other platforms in the coming days, Snap Inc. is redesigning its app to include a search bar, which should make both navigation and discovery quicker and more straightforward.In its early days, Snapchat‘s hallmark was its almost absurdly minimalist user interface (UI), devoid of any hints or tutorials as to how to get around the app. If you couldn’t figure it out, sorry bro—maybe you should just stick with using Facebook. Today, roughly five years after its initial launch, the app has more than 150 million daily active users (more than competitor Twitter), and a host of publishers and brands striving to get millennial eyes on their content. By adding universal search, Snap Inc. is appeasing new users, giving power users a faster way to navigate, and giving publishers an opportunity to make more cash.

How to search on Snapchat

By typing a friend’s name, for example, you’re instantly taken to your message thread with that contact. This universal search feature could also give Snapchat an avenue for revenue in the future (read: ads), but for now, there are no public plans for that.

You can check out a video tour of the new Snapchat interface below.

The update includes a few other changes, as well. Rather than navigating to your personal profile by swiping downwards from the top of the screen, now, you tap the Bitmoji icon in the upper left (next to the new search bar) to do so. Users will also be able to submit snaps to a new global live story called “Our Story.” Previously, this was restricted to pulling snaps from special events (such as a sports game) or locations. The app is also reintroducing a “Best Friends” section in your contacts, an only-visible-to-you list of the friends you interact with the most in the app.