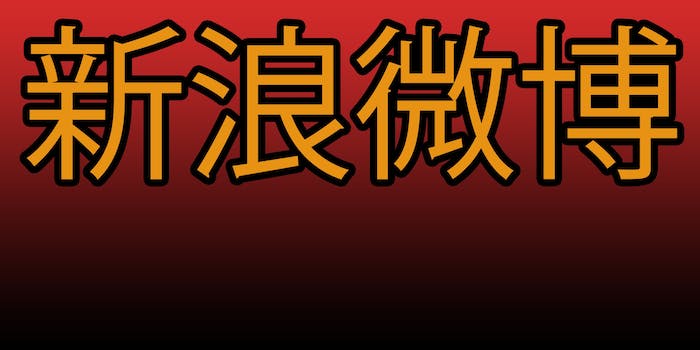 How to pronounce Sina Weibo

If you're investor, you should at least be able to say the name of the company whose shares you just bought.

On Thursday, the company commonly known as China’s Twitter is set to go public in the United States. Sina Weibo hopes to raise something in the neighborhood of $380 million with its IPO, and as with any major U.S. stock market debut by a Chinese company, potential investors have a lot of niggling concerns.

There are signs that China’s voracious economy is finally slowing down, for one thing. And then there’s the problem with censorship: A number of recent clampdowns saw the Internet behemoth shed millions of users late last year, which raises serious concerns about its long-term viability.

But the question that everyone really wants to know is this: How the heck do you pronounce its name?

People have interpreted a number of ways: sinna weebow, sign-uh way-bow. My colleagues at the Daily Dot shyly proffer a half-dozen different pronunciations when asking about it. My favorite confused vowel-spew, however, has to come from Vice’s Reihan Salam, who projected his own uncertainty directly into the word: “why boa?”

None of those is correct.

“Sina” is pronounced see-nuh (not “sign-uh”) and “weibo” is pronounced way-bwo (not way-bow). That final syllable is a little tricky for English speakers, so here’s how it sounds:

But hold on to your tongues. We’re going to dig a little deeper into these two seemingly simple words.

Part of the confusion stems from the fact that “Sina” isn’t actually a word in Chinese, so there’s no obvious suggestion on how to pronounce it. I called up the Sina U.S. offices this morning just to check, and it turns out my interpretation above is correct: See-nuh.

No one in China ever refers to the company by that name, however. Over there, it’s officially called 新浪, which is pronounced xīnlàng and means “new wave.”

Wait! You’re wondering. What the heck do those lines mean? And how do you pronounce the “x”?

Well, the latter question is a little easier: It’s basically just an English “sh” sound (though not exactly). So that’s sheen lahng, for your basic English mangling.

If you want to attempt to do the Chinese language justice, you can move on to interpreting those weird lines. They represent Chinese tones, the legendary scourge of foreign speakers, capable of twisting the most trained of linguists’ mouths into terrifying contortions. Tones change the meanings of words, giving every syllable an automatic homophone: ma means mother, but it can also mean horse, and it can also mean to scold.

Tones aren’t so hard; 1.3 billion people have managed to get along fine with them.

There are only four (well, five, actually) and they all have approximations in English. Take the horizontal bar on xīn, for instance. That’s a first tone—a high, even sound, not unlike that the way you’d pronounce the “aaa” in “tadaaa.” The second syllable, làng, is a fourth, or falling tone. That’s a little harder to describe, but easy to mimic when you hear it: Think of the difference between the way you pronounce “can” and “can’t.” Can’t is swift, sudden, almost angry. That’s how you pronounce a fourth tone word.

A wēibó is just a generic term that literally translates as “microblog.” You’ll recognize that bar again on the first syllable—a steady, high tone. The rising accent over the “o” is new, however. It represents a second tone, which is perhaps the easiest for English speakers to learn.

Think about how your stereotypical Valley girl speaks—that obnoxious, rising sound that caps the end of every sentence, making conversation between two Valley girls sound like an endless loop of questions. Oh my god this is awesome? I like speaking Chinese? That’s pretty close to the second tone in Chinese. You can think of this as the question tone, except instead of changing a word into a question, it changes the meaning entirely.

So there you have it. If you’re an investor, you’ll at least be able to say the name of the company whose shares you just bought. If you’re anyone else, you’ll no longer have to stumble over your own tongue. See-nuh wei-bwo. Easy as Twitter.