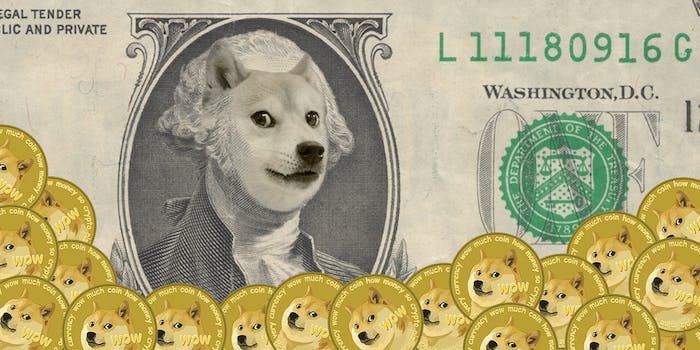 You're 4 quick steps away from owning the most-traded digital currency on the Internet.

Tell me if this applies to you: You see that tons of people are trading Dogecoin, the cryptocurrency that’s based on the Doge meme and acts like a way less serious Bitcoin, and you want in.

You see that there are now Dogecoin parties, that dogecoiners sent bobsledders to the Olympics, and you want to be a part of that.

Be warned: What I’m about to share is not the cheapest or the most secure way to buy Dogecoin. It’s just the easiest.

It’s only truly easy, by the way, if you have an Android phone and a Reddit account. If you don’t have an Android phone or tablet*, or you’re not American**, it’s still very doable, just not quite as clean. Please head to the bottom if either applies to you (for the simple reason that adding all these caveats here fusses up the guide).

Warning: I’m literally telling you how to send money to some strangers on Reddit, hoping that they’ll honor an agreement and send funny dog-meme-based currency back to you. You see the obvious danger in that, right? I’ve done this a few times successfully, but you should obviously proceed with maximum caution.

If you’re not scared away, here’s all it takes:

The app automatically gives you what’s called a wallet, which is a code that identifies where you keep your funny Internet dog money. Think of it as your long, automatically-assigned Dogecoin email address.

2) Register your Google Wallet account, if you haven’t already.

I did it from my phone, but you can also do it from anywhere you use Google applications.

This is the part where you have to be American to play. It stinks, I know, but the U.S. of A. is apparently the only country whose finances Google believes in at the moment. You may need to show two forms of ID, then share a form of payment information with Wallet. I used my debit card. Are you scared of sharing that information with Google? That’s fair. But I’m resigned to how much the company knows about me anyway.

Dogecoin is usually sold in units of 1,000. Last week, sales on the marketplace were going for about $1.65 for 1,000 DGC. As I write this, it’s hovering around $2.60. Though that’s a huge jump in rates, remember that Dogecoin is still really cheap, and it’s supposed to be fun, something you can just throw around.

Look for anyone selling; they’ll start their post with “[SD],” which means they’re selling Dogecoin. You’ll want to scope out the seller Click her username and peruse her history. Look at the actual thread, and verify as much as you can that this person is really honoring sales. Then message that seller, tell her how much you’re going to buy, plus your Dogecoin address. If she’s game, she’ll give you an email address to send money to through Google Wallet. Click “send money,” send it to her email address, and message her once it’s gone through. Then, unless you’ve mistyped something or you’re being scammed or the world is ending, your wallet will ring with the bounty of fresh fake canine dough.

Now you finally own a decent amount of real Dogecoin. It’s great to have on your phone, in case you ever come across someone selling cupcakes for Dogecoin, as I once did. Or if you want to get a burger in hipster areas of London. Or send a bobsledder to the next Winter Olympics (this year’s have already been taken care of), in Pyeongchang in 2018. Or, you know, just register your account with the Dogetip bot and tip somebody for making a great comment on Reddit. It feels good.

* If you don’t have an Android device: well, then you’re just going to have to get your own wallet elsewhere. Start with an online one because it’s super easy, but then you’ll want to move to a desktop or paper one because it’s more secure.  Use DogeAPI or Dogevault to get one for free. Then skip ahead to step 2.

** Ah, screw Google Wallet. It wasn’t for you anyway. Skip step 2 entirely. Make sure you register a PayPal account if you don’t have one already. When you reach Step 3, look for users specifically using PayPal. There are fewer of them, but they’re there.