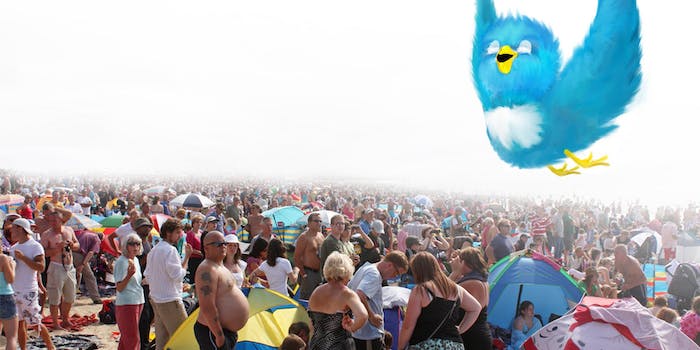 Put my Twitter handle on my grave, because I'll probably chase followers till I die.

When I reached about 500 or 600 followers, I felt like Twitter changed. I hadn’t followed many new accounts, but there seemed to be a shift. I felt like my notifications stream was as entertaining as my own feed, and I was finally getting back what I was putting in.

Eighty-two percent of Twitter users have fewer than 350 followers, and 391 million Twitter accounts have zero. But, as with nearly all things things in life, most of us want more. Famous celebrities like Taye Diggs and Montel Williams have spent thousands of dollars on social media consultants tasked with pumping up their presence. People make awful jokes, fill their tweets with erroneous hashtags, manual-RT, and even pay to promote their own accounts—all in pursuit of more followers.

According to analytics firm Beevolve, the average Twitter user has around 208 followers. However, nearly half (44 percent) of all users have never sent a tweet. One might assume that the more you tweet, the more followers you’ll gain, but tweet frequency rarely correlates with follower count. Mark Zuckerberg (@finkd), Beyoncé (@Beyonce) and Brian Williams (@bwilliams) have all tweeted fewer than 20 times, but they’re still blessed with thousands of followers because of who they are.

Studies say that once you make about $75,000 a year, earning more money doesn’t affect your overall happiness. Is there a baseline follower equivalent for Twitter?

I have 200 followers. This is the same amount as Jesus when he was first starting out, I think.

@mattbuchanan i would give anything to have <1K followers again. Those were the days. I could tweet weird shit and just… beautiful silence

Samir Mezrahi, who runs social media for BuzzFeed, wrote in late 2012 that the target number of followers should be 3,000. “In general, when you hit 3,000, you are pretty much guaranteed to get some kind of reaction to all of your tweets. Which is what we want to get out of a tweet, whether it is a fav, a comment, or a retweet, we live to know that someone is listening. Even if the response is negative, you want to know that there is someone out there reading what you do.”

But not everyone feels like their account needs spectators. “Half the stuff I tweet isn’t really well-suited for an audience so much as it’s getting an earworm (brainworm?) out of my head. Almost like how I imagine people use a journal or whatever,” says Nate (@Epitasis), an anonymous Twitter user from Illinois. “I feel pretty fortunate to even have the amount of followers I do because it’s a little silly that 700 people subject themselves to my stream of consciousness.”

Austin McElvaney (@shaqlvaney), a Twitter user in San Francisco who currently has 184 followers, found the process of gaining followers so frustrating he finally gave up chasing a number altogether. “I look at Twitter most days, but I don’t tweet too often anymore. I tried on a couple hats over the years as a tweeter: asking questions to people I wouldn’t otherwise have access to, tweeting jokes/commentary on breaking news/memes, for a while I was tweeting things I would hear in public just randomly out of context, but I never really got much utility out of that type of tweeting, so now I just listen for my own benefit.” However, he does admit, “When people I follow answer comments I’ve posted to them, I do get this like giddy ‘I just met a celebrity’ buzz.”

If you’re not a mainstream celebrity, Internet-famous, or a well-known member of the media, the Twitter-follower sweet spot seems to lie somewhere around 500. Of course, if you use Twitter solely as an RSS feed, followers aren’t necessary at all. But like Mezrahi wrote, most people just want to be heard.

Five hundred followers is significant enough that you probably have a group of friends on the service whom you interact with regularly. You may also have a handful of brands you enjoy following you back and, if you’re lucky, a well-known account or someone you admire may have chosen to subscribe to your feed.

As Mezrahi wrote, most people just want to be heard. Most users don’t need a response to every tweet, they don’t live for the RTs, but they want to feel like what they’re saying has some sort value. Five hundred followers guarantees that you’re anonymous enough to tweet crazy things without scrutiny, but you still don’t feel like you’re shouting to an Internet wall.

All that said, there’s nothing like the rush of a new follow. Put my Twitter handle on my grave, because I’ll probably chase followers till I die.

‘When does it end? How many followers do you need?’ My worried girlfriend asks. [i stir my martini then eat the olive] More