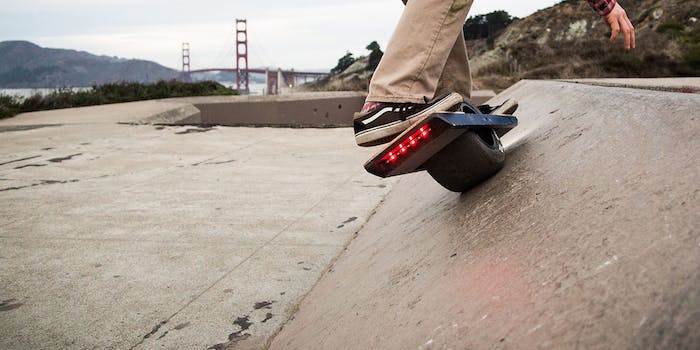 The Chinese company was allegedly infringing on U.S patents.

On Thursday, two federal Marshals showed up to the booth of Changzhou First International Trade and began packing up their products in boxes and tearing down marketing material, Bloomberg reports. The company was hawking a product that looks remarkably similar to the one made and patented Onewheel, created by American company Future Motion.

Onewheel isn’t your typical hoverboard: There’s a single wheel in the center; riders balance on a board with their feet on each side. Future Motion was recently granted a patent that prohibits any company from designing a device that shares Onewheel’s unique look. This gave the company some stronger ground in order to allege patent infringement, their lawyer says.

“Would we have done this without the design patent being issued? The answer is we wouldn’t have bothered,” Shawn Kolitch, a lawyer for Future Motion told Bloomberg. “If you can show the design patent drawing next to an accused product side by side, and they look identical, it helps your case.”

The company originally saw the knockoffs online, but couldn’t do them to stop them being sold. Kolitch even went as far as approaching the booth the directly in an attempt to stop Changzhou First International Trade, but to no avail. It wasn’t until Onewheel filed a temporary restraining order with a judge later that day, prompting an emergency court order and the Marshals, that Onewheel became the only game in town.