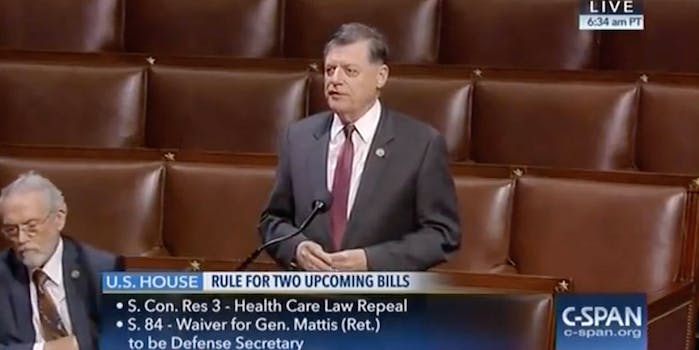 Nine Republicans and every single Democrat voted against the bill.

The U.S. House of Representatives on Friday passed legislation that would instruct Congress to get to work on a repeal of the Affordable Care Act, commonly known as Obamacare.

In a widely expected 227-198 vote on party lines, the House approved a budget resolution for fiscal 2017 that would set the wheels in motion to repeal—and ostensibly replace—Obamacare. The House vote on dismantling Obamacare came just over 24 hours after the Senate approved its version of the resolution in a late-night voting session in the early hours of Thursday morning.

“My colleagues, this experiment has failed,” said House Speaker Paul Ryan (R-Wisc.), referring to the 2010 health care law. “This law is collapsing as we speak. And we have to step in before things get even worse. This is nothing short of a rescue mission,” said Ryan in a rare floor speech.

But the hard part is yet to begin. Moderate Republicans and members of the usually cantankerous House Freedom Caucus are nervous about repealing the law without a set replacement. Republicans admit there is no consensus on what plan to offer as a replacement.

Rep. Charlie Dent (R-Pa.) told reporters on Thursday that he had serious reservations about repealing Obamacare without a feasible plan to replace it. “Before we take this plane in the air, we better have a damn good idea where we’re gonna land it. Because right now, we’re not sure how we’re gonna land,” Dent said.

Early this morning, Senate voted on a budget that grows debt by nearly 50%. Thank you, @RandPaul, only R who voted no. It now goes to House.

President-elect Donald Trump has instructed Republicans in Congress to repeal the law as soon as possible. He has said that the replacement of Obamacare would happen “essentially simultaneously.” Trump has also promised that his administration’s replacement plan for Obamacare would come as soon as the Senate confirms Rep. Tom Price (R-Ga.) for Secretary of Health and Human Services.

Both Senate and House Republicans say this is impossible. The Senate Finance Committee—which will vote on Price’s nomination and send it to the Senate floor for a full vote—has yet to schedule a confirmation hearing for him. Senate Finance will hear testimony from Trump’s Treasury Secretary nominee, Steven Mnuchin, next Thursday. Price is scheduled to testify Wednesday before the Senate Health, Education, Labor, and Pensions Committee—an interesting choice given the panel won’t vote on Price’s nomination.

What happens next? As CQ notes, the House and the Senate will begin a conference session next week to hammer out their separate versions of the fiscal 2017 budget blueprint.

Committees in both the House and Senate will then get to work on a budget reconciliation bill that would repeal major portions of Obamacare. The measure would then head back to both chambers in Congress for separate votes.

Congress has set a soft deadline of Jan. 27 for lawmakers to repeal Obamacare—but few expect them to meet it.