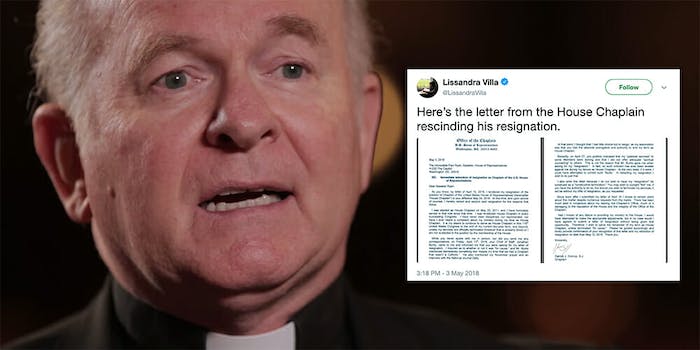 Patrick Conroy has taken back his resignation.

Former House Chaplain Patrick Conroy has taken back his resignation in a scathing letter to Speaker Paul Ryan (R-Wis.), saying he was forced into resigning without a cause—except that he’s Catholic.

Conroy, who resigned April 15 and implied that Ryan had asked him to do so, submitted another letter on Thursday listing the reasons he has decided not to resign after all, including that he was never disciplined or reprimanded in his seven-year post as chaplain.

He also said that he never received formal correspondence or a visit from Ryan regarding his leave, but that Ryan’s chief of staff, Jonathan Burks, acted as Ryan’s messenger and requested a letter of resignation.

“I inquired as to whether or not it was ‘for the cause,’ and Mr. Burks mentioned dismissively something like ‘maybe it’s time that we had a Chaplain that wasn’t a Catholic,” Conroy wrote.

Here’s the letter from the House Chaplain rescinding his resignation. pic.twitter.com/kokGIor3bm

Last week, Conroy told the New York Times that Ryan asked him to “stay out of politics” in November after the chaplain said a prayer on the House floor as the chamber debated tax reform.

In his Thursday letter, Conroy said since writing a letter of resignation, “there has been much said in conjecture” regarding his departure that’s “harmful” to the House and the chaplain’s office.

“Had I known of any failure in providing my ministry to the House, I would have attempted to make the appropriate adjustments, but in no case would I have agreed to submit a letter of resignation without being given that opportunity,” Conroy wrote.

Update 5:45 CT, May 3: House Speaker Paul Ryan said in a statement Thursday that House Chaplain Patrick Conroy will no longer be dismissed, the Hill reported.

“I have accepted Father Conroy’s letter and decided that he will remain in his position as Chaplain of the House,” Ryan said. “My original decision was made in what I believed to be the best interest of this institution. To be clear, that decision was based on my duty to ensure that the House has the kind of pastoral services that it deserves.”