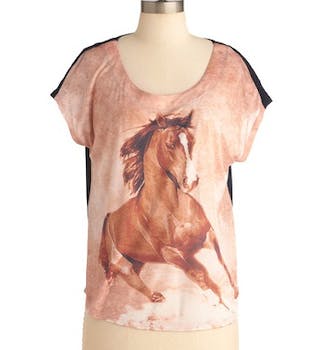 If you're going to capitalize on an online meme, shouldn't you at least mention it?

Do you love Twitter bot phenomenon @horse_ebooks enough to spend $50 on a shirt proving it?

ModCloth, an “indie, vintage, and retro-inspired” online marketplace thinks you are.

The listing for the @horse_ebooks shirt, called the “Horse E-Looks T-Shirt,” went up Monday. The black, white, and brown top is sheer, but the graphic, emblazoned on the front, is unmistakeably the same art used as the @horse_ebooks account’s avatar. But unlike the vast array of explicit @horse_ebooks fan gear available online, the description of the shirt doesn’t even attempt to make reference to the now-infamous Twitter account.

It’s worth pointing out that the image, though now made famous by its association with @horse_ebooks, is uncredited—and the Modcloth listing also makes no reference to the original artist, whoever he or she is.

The growing online reaction to the shirt is mixed so far. Nick Lebowski seemed annoyed by the price, while Abby Holmes thought it was the “best ever.”

The top, designed by Kensie, whose website is currently under construction, does not appear to be affiliated with @horse_ebooks in any way. (Kensie, mostly known as a shoe brand, is a featured designer on Modcloth and is also sold in physical stores.)