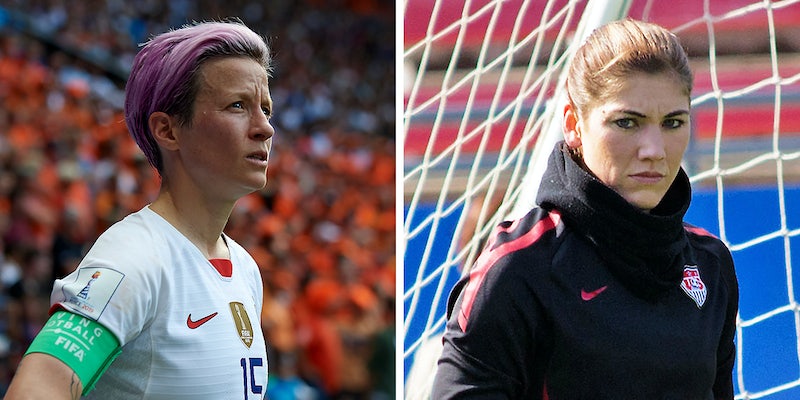 Hope Solo accuses Megan Rapinoe of bullying teammates into anthem protest. Solo wasn’t even on the team then

Her claims lit up the right-wing echo chamber. There's just one problem.

The only problem with Solo’s claim? She was kicked off the team before Rapinoe ever knelt during the national anthem.

In fact, Colin Kaepernick’s kneeling protest also began after Solo was kicked off the team. Citing “conduct that is counter to the organization’s principles,” U.S. Soccer kicked Solo off the team on Aug. 24, 2016. Kaepernick first dropped to a knee during “The Star-Spangled Banner” on Sept. 1, 2016.

Solo made this allegation on a recent episode of Goal’s podcast, “All of US: The U.S. Women’s Soccer Show,” where the former goalkeeper is a frequent guest. Goal included her comments about Rapinoe in a blog on Friday.

Even outlets that noted the discrepancy in time, such as the Daily Caller, which was among the first to regurgitate Goal’s blog, took Rapinoe to task as if the bullying allegation was an indisputable fact. “I’m not surprised at all by Solo’s comments,” wrote Daily Caller writer David Hookstead. “In fact, I kind of always assumed this kind of attitude was unfolding behind the scenes.”

He concluded with the sports version of “Shut up and sing.”

“As I’ve said many times, protesting has no place in sports. If you want to protest, then do it on your own time. You don’t do it while in uniform and you don’t allegedly bully teammates into doing it,” Hookstead added.

Some outlets, such as TMZ, even cast the days-old bullying allegation as “breaking news.”

As her claim gained steam, many pointed out that Solo was off the team before Rapinoe dropped to a knee during the anthem on Sept. 4, 2016. Rapinoe was the only member of the team to do so at the time.

“I’m not a big soccer fan, but even I know that Hope Solo left the USWNT before Megan Rapinoe started kneeling,” tweeted Santiago Mayer, executive director of Voters of Tomorrow.

Others pointed out that Solo has a spotty record that includes an arrest for domestic violence (the charges were later dropped) and making disparaging remarks about a coach, a former teammate, and an opponent on separate occasions.

Of course, people inclined to believe Solo’s comments did just that. “Does that surprise anyone?” one commented. Another suggested that Rapinoe play soccer for Afghanistan. In fairness, Solo as a former team standout may have insider knowledge of the national team’s locker-room dynamics.

Last winter, USWNT decided as a team to stop protesting during the anthem.

Rapinoe has not yet weighed in on Solo’s accusation.