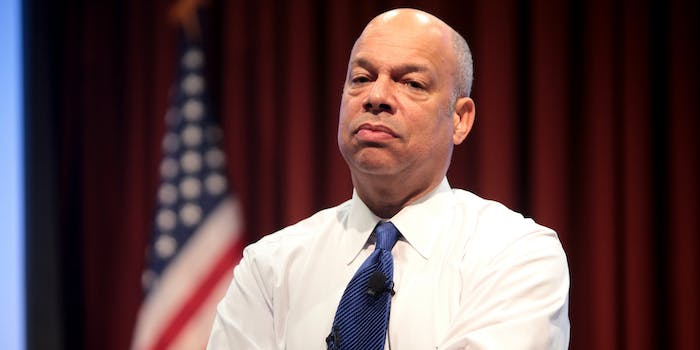 Maybe U.S. government email is just a pain to use?

Defense Secretary Chuck Hagel and Attorney General Eric Holder, both of whom have since retired from the administration, used personal accounts for work, and on Tuesday, Secretary of Homeland Security Jeh Johnson came under scrutiny for a similar practice.

Johnson, the head of the department responsible for national security and counterterrorism, used a nongovernmental email address on his work computer for more than a year, in violation of a DHS rule prohibiting the practice. More than two dozen of his top aides also used private addresses on government machines.

A senior DHS official told Bloomberg that other high-ranking department advisers “were granted informal waivers” to conduct the practice. Alejandro Mayorkas, the deputy secretary, and Johnson chief of staff Christian Marrone were among the staffers to receive waivers.

Bloomberg’s report made it clear that there was no proof that DHS officials had conducted government work through their private accounts, as Clinton and other top Obama officials did.

In a Tuesday morning interview with Politico, Johnson said that he would suspend the waivers and tell his staff to stop using private email accounts at work.

“This is something that I had for a while,” he said, “and when I read [Tuesday’s Bloomberg] story I said, ‘Whoops, this is not a good practice, so I should discontinue it.'”

A DHS spokeswoman confirmed to Bloomberg that the use of personal email addresses from department computers had been suspended.

Secretary Clinton’s use of a private email address—and her decision to host the email server in her home—general substantial backlash that became the first bona-fide scandal of her nascent presidential campaign. Security experts and transparency advocates blasted the practice, and because Clinton erased the server, it is impossible to know whether classified information ever passed through it.

Although the government has been the victim of numerous hacks in recent years, private servers are still considered less secure than those run by State and other major federal departments.