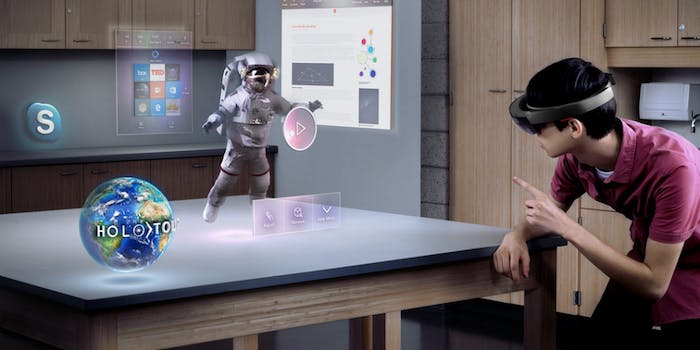 Microsoft’s HoloLens goes up for pre-order at a whopping $3,000

But don't expect one anytime soon.

If you’re tired of VR and you’d rather just add a few layers of digital flair to the real world, you’ll be happy to hear that HoloLens, Microsoft’s augmented reality headgear, is shipping in March. You’ll be less happy to hear that it still costs a whopping $3,000.

The company is accepting pre-orders for the untethered holographic computer; developer applicants will begin receiving invites to buy the development edition of the HoloLens. It will begin shipping March 30.

This initial rollout of HoloLens is the developer model only, meaning it’s not consumer-ready yet. Microsoft is letting programmers, designers, entrepreneurs, and others who wants to build things for the mixed-reality headgear get their hands on the first version.

HoloLens will come with developer documentation describing ways of creating holographic apps. Additionally, the self-contained computerized headset will have built-in “experiences” to help users navigate and create content for consumers. HoloStudio assists with creating 3D-projects at real-world scale; Skype, the video and voice chat app, enables holographic communication; and HoloTour is a way for people to project interactive 360-degree experiences and walk around inside them, like the environment around Machu Picchu.

Companies and organizations are already using HoloLens to create and display worlds in augmented reality. NASA partnered with Microsoft and uses HoloLens to project and explore the surface area of Mars on right here on Earth, and helps astronauts and scientists navigate a rover on the Red Planet. Likewise, Case Western Reserve University and the Cleveland Clinic use HoloLens for immersive anatomy education.

The price tag is steep for HoloLens, but it could drop a bit before it hits consumers. There’s nothing else like it on the market right now—a computer system that projects another reality on the one you’re standing in, contained entirely in a headset. Oculus, the highly-anticipated Facebook-owned VR headset that requires a compatible computer has bundles that retail for $1,500.

Despite the cool-factor of these systems, most consumers won’t be buying them anytime soon. The price alone is a significant deterrent, and development of practical applications beyond gaming or enterprise uses is still in early stages. Developers who want to make sure their apps are ready for mainstream adoption can apply for a HoloLens developer model. But the rest of us will be waiting a while.

H/T The Next Web | Photo via Microsoft