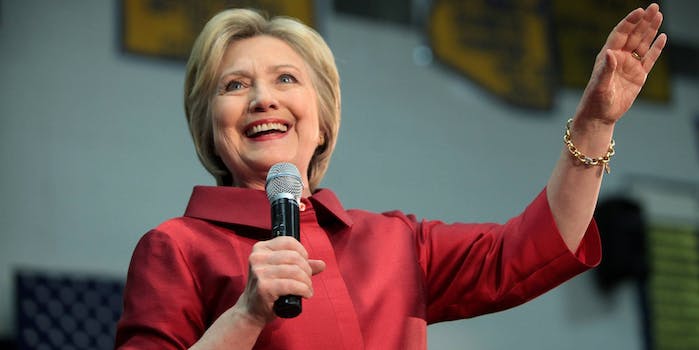 Clinton's margin of victory was significant.

With 2 percent reporting, Clinton had 59.5 percent to Sanders’s 39.8 percent. The Pennsylvania win is Clinton’s third of the night, including victories in Maryland, and Delaware.

The polling average showed an easy Clinton win heading into Tuesday night, and the results reflected that wide margin.

While Pennsylvania’s Republican primary features an unusual delegate system, things are simpler on the Democratic side, where the state’s 189 pledged delegates are awarded proportionally based on a candidate’s percentage of the vote. Of the 189, 127 are awarded on a per-district basis. The remaining 62 are statewide. Pennsylvania also awards 21 superdelegates, who are not bound to any candidate.

Not including delegates awarded in Tuesday night’s contests, Clinton leads Sanders 1,946 to 1,192 in total delegate count. A Democratic presidential candidate must receive 2,383 delegates to secure the party’s nomination.

Clinton’s victory in Pennsylvania increases Sanders’s already steep odds at winning the Democratic nomination. The Sanders campaign on Tuesday told the New York Times that it plans to be “up front” about the mathematical reality facing the Vermont senator.

Candidates from both parties now head to Indiana, where voters will take to the polls on May 3.