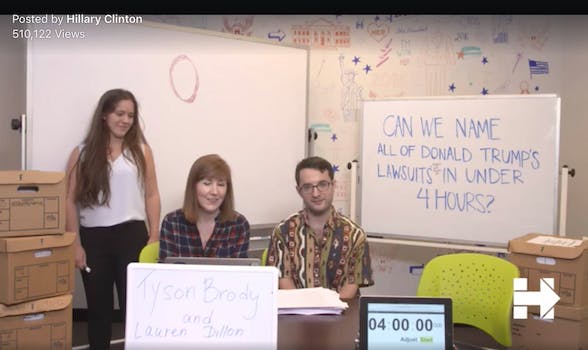 The election just got a bit more interesting.

On Tuesday afternoon, the presumptive Democratic nominee had her staffers read the alleged 5,500 lawsuits that Donald Trump has been involved in—all in under four hours.

The video—which was streamed via Facebook Live—shows staffers taking turns reading the names of each lawsuit while another person keeps tally.

According to Mashable, the stream had 8,000 reactions and 4,000 comments within 13 minutes.

A USA Today report claimed Trump and his businesses were involved in at least 3,500 legal actions in state and federal court over 30 years. The reports shows that out of the total cases, Trump or his companies were the plaintiff in 1,900 and the defendant in 1,450.

Clinton’s video, which was completed at the time of publication, was seemingly a way for the Democratic candidate to prove that her opponent is shady and dishonesty.