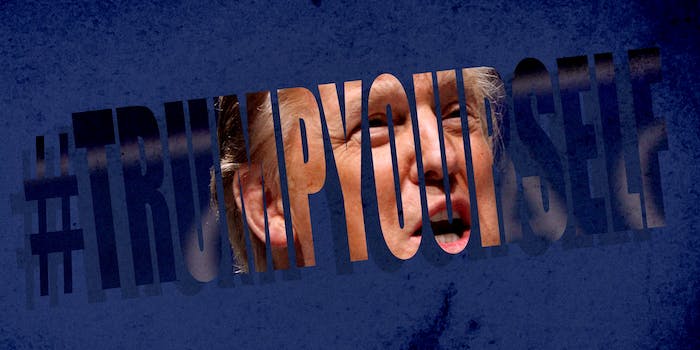 The results are horrifying.

If you’re looking to get called a “fat pig,” “slob,” “loser,” or maybe even a “hater” by GOP nominee Donald Trump, your search stops now.

On Thursday, the presumptive Democratic nominee, Hillary Clinton, launched a Facebook app called Trump Yourself. The platform overlays various insults Trump has used against women, Muslims, undocumented immigrants, people who doubt his success, and more, and it drapes them over your profile picture.

The insults available go as far back as 1997 and are as recent as a Trump tweet in May 2016. Many of the available filters highlight Trump’s more contentious comments, including “If you need Viagra, you’re probably with the wrong girl,” and “When Mexico sends its people, they’re not sending their best. …. They’re bringing drugs. They’re bringing crime. They’re rapists.”

Teddy Goff, a member of the Clinton campaign, tweeted that the site was just “too darn popular.” An overflow of people hoping to get insults hurled at them reportedly caused the Facebook page to temporarily crash Thursday afternoon.

For the first time in 15+ months, a page on https://t.co/yEiFDRYe8R is down due to load. Trump Yourself is too darn popular. Bear with us!

So I played around with the #TrumpYourself filter for a bit and this one's too good not to share pic.twitter.com/fyxbExcBTj

BEST THING EVER. What has Donald Trump said about people like you? https://t.co/mLFq5PN7qY #TrumpYourself pic.twitter.com/bfZSMBBxe8

Trump has yet to post a mean tweet about Clinton’s new online application, but don’t worry, it’s not too late. The newly elected GOP nominee is scheduled to speak to the nation Thursday night at the Republican National Convention. We’re sure he won’t disappoint.