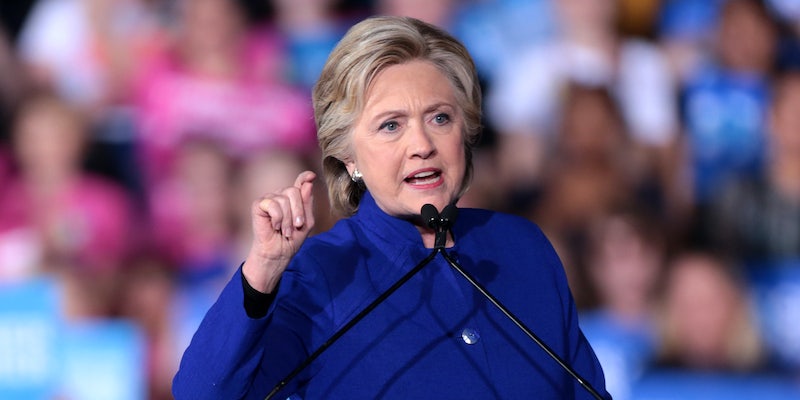 Unsurprisingly, neither Satanism, cults, or intergalactic rituals are mentioned at any point in the video.

A video has surfaced online that conspiracy theorists claim shows Hillary Clinton dressed as a “space cult leader” during an “annual earth ritual.”

The footage, published by the conspiratorial website “Next News Network,” is touted to reveal for the first time “the elite inner sanctum of Hillary Clinton’s bizarre world.”

Next News Network further added that the video, which appears to show Clinton in a purple robe at a large gathering, was taken on September 3rd just “20 days before the pagan holiday of Mabon celebrating the autumnal equinox.”

“Now you have seen it all. Hillary, surrounded by individuals in strange attire, herself wearing shimmering purple robes,” the article says. “Thankfully this footage was leaked so you could see the elite at play. The bigger question remains, what happened when the cameras stopped rolling.”

In one point in the video, a woman dressed in a costume of the Disney character Maleficent as well as another in what appears to be a space suit can be seen near Clinton.

In comments across social media, users reacted to what they believed was undeniable proof of Clinton’s Satanic beliefs.

Yet the event was anything but a so-called Satanic ritual. Later on in its article, Next News Network casually states that the gathering was actually a birthday party for a woman named Ann Drake, president of the Women’s Leadership Center.

The organization states on its website that it aims “to create a special center” where women can come together to learn, innovate, exchange ideas, reflect, challenge old models, and create new possibilities.

“Here we will convene women leaders at the forefront of public and private enterprise, global supply chain, engineering and technology, infrastructure and design, space and astrophysics, creating global solutions to complex problems in a setting designed to foster conversation and collaboration,” the organization adds.

Further on in the video, Clinton can be heard speaking to the crowd about the birthday party and Drake’s work.

Unsurprisingly, neither Satanism, cults, or intergalactic rituals are mentioned at any point in the video.

Fact-checking website Lead Stories was even able to locate a publicly available invitation that explained how the event was a space-themed costume party.

The latest conspiracy theory regarding Hillary Clinton reveals how seemingly innocuous media content, cast in a false context, can fool many with preconceived notions regarding controversial political figures.

The importance of research and fact-checking before sharing such claims is as important as ever.