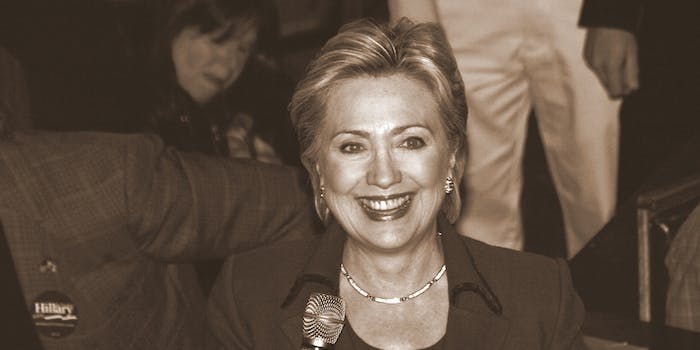 Clinton's answers aren't as cut and dry as they were five months ago.

Hillary Clinton insisted earlier this year that her homebrew email server was entirely devoid of any classified information. That’s not an assessment you’re likely to hear the Democratic presidential candidate make again.

When asked about the security implications of using a private server to conduct official U.S. State Department business on March 10, Hillary Clinton told reporters at the United Nations: “I did not email any classified material to anyone on my email. There is no classified material.”

Five months later, the Clinton camp’s statements regarding the scandal have evolved, isolating the former secretary of state from her former colleagues, and creating an air of plausible deniability.

While maintaining that Clinton never actually sent any classified emails herself, a campaign spokesperson on Friday opened up the possibility that, perhaps, “some material unknowingly ended up somewhere on the State Department’s unclassified email system.”

That statement was delivered only days after news broke that two emails kept on Clinton’s private server contained information deemed “top secret,” one of the U.S. government’s highest security classifications.

As of last week, the Federal Bureau of Investigation (FBI) is seeking to determine who at the State Department might have sent classified material to Clinton. The investigation will lead federal agents to review the correspondence of numerous current and former officials who worked under Clinton during her tenure as secretary of state.

The scope of Clinton’s recent statements on the scandal are limited to categorizing her own behavior, and not necessarily that of her former State Department subordinates. Their emails to Clinton were likewise housed on the private, unsecured server at her New York residence.

“This isn’t about me,” she told reporters at the Iowa State Fair on Saturday, repeating: “I never sent classified material on my email.”

Clinton added that she never received any emails marked classified; a significant change in wording from the more clear-cut statement in March that her email server contained “no classified material” whatsoever.

Following the disclosure on Friday that a Clinton adviser apparently referenced classified material in an email about U.S. drone operations, several officials—who were granted anonymity by the Associated Press—suggested that Clinton’s aides may have incidentally picked up bits of classified information through some other, unclassified channel; what the officials referred to as a case of “parallel reporting.”

The controversy over Clinton’s emails has become a nagging thorn in the side of her 2016 presidential campaign, with her Republican opponents rushing to paint her as overly secretive, paranoid, and unfit for leadership of the country. Some, including Republican frontrunner Donald Trump, have gone as far as to outright accuse Clinton of criminality.

Speaking to reporters on Saturday, however, Clinton made up her own word for the scandal. “This is the usual partisanization,” she said. Nobody on the campaign trail ever asks about her emails, she insisted.

Auditors with the intelligence community, who by Monday had screened roughly 23 percent of the Clinton emails, have so far flagged 305 documents for further review. Clinton reportedly turned over more than 30,400 emails to the State Department and deleted more than 31,800, which she said were personal.

It has yet to be determined whether any of the newly flagged emails contain classified information. The State Department has described the process of redacting Clinton’s emails before they are made public as “routine.”