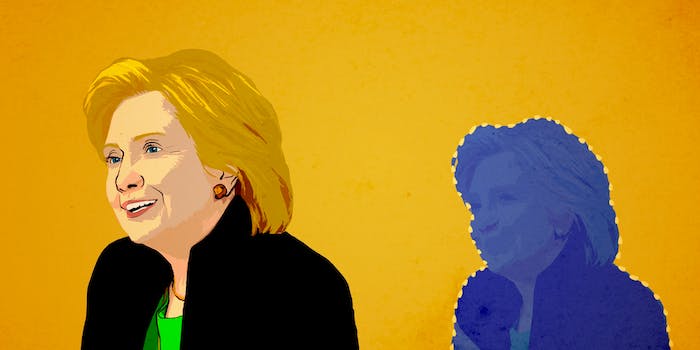 Clinton's health concerns are real. Conspiracy theories about a body double are not.

Supporters of Donald Trump, the Republican nominee, believe his Democratic opponent is using a body double to hide the severity of her medical condition, and they say they have the photographic evidence to back it up.

On Sunday, Clinton left a 9/11 memorial event in lower Manhattan early after she felt ill. A video emerged showing the former secretary of state stumbling and needing help entering a van, providing evidence to Trump supporters that Clinton is physically unfit to serve as president.

Clinton’s doctor later released a statement saying she was dehydrated and suffering from pneumonia.

“Secretary Clinton has been experiencing a cough related to allergies. On Friday, during follow up evaluation of her prolonged cough, she was diagnosed with pneumonia,” Dr. Lisa R. Bardack, Clinton’s doctor, said in a statement. “She was put on antibiotics, and advised to rest and modify her schedule. While at this morning’s event, she became overheated and dehydrated. I have just examined her and she is now re-hydrated and recovering nicely.”

Before being treated at her home in Chappaqua, New York, Clinton was taken to her daughter Chelsea’s nearby apartment. Upon exiting the apartment building, she said to onlookers, “I’m feeling great. It’s a beautiful day in New York.”

Photos taken of Clinton walking out of the building have fueled speculation that the person smiling and waving was not actually Clinton but a body double. Speculators are picking apart the photos to identify inconsistencies, such as nose shape, weight, and finger length.

Conspiracy theorists are pointing to actress Teresa Barnwell, a Clinton impersonator who has been lauded as the “greatest Clinton lookalike” for her resemblance to the politician.

Barnwell joined in, first attempting to tamp down the conspiracy theory by tweeting that she was in Los Angeles on Sunday, not in New York City.

I'm in Los Angeles today. Not in NYC!

Then she ramped things back up by posting a photo that shows the outside of Chelsea Clinton’s apartment building where her mother was photographed.

But she was just having a little fun, it seems, as she later directly addressed the uproar.

OK people, calm down. I was in LA today, all day. Was just messin' with your crazy conspiracy minded little heads. Go to bed.

Despite this, #HillarysBodyDouble is trending on Twitter as the conspiracy theory continues to spread. This in turn has Clinton supporters (or people who just think the whole thing is a ridiculous farce) poking fun at those who think Clinton really did use a body double, which video and photo evidence concretely disproves.

And this is why people think conservatives are a little #HillarysBodyDouble pic.twitter.com/Wfntpj38pc

Back in the real world, Clinton’s health has legitimately shaken up the 2016 presidential race just two months before the November election. The Democratic National Committee is reportedly meeting to plan for the worst-case scenario of Clinton being forced to drop out of the race due to her health. And the press is questioning the Clinton campaign’s decision to hide her illness, particularly after she hugged a young girl while having a contagious illness that reportedly left several of her staff members ill.

Trump, who said he hopes Clinton gets well soon, said health is now an “issue” in the election and may release his health records later this week.