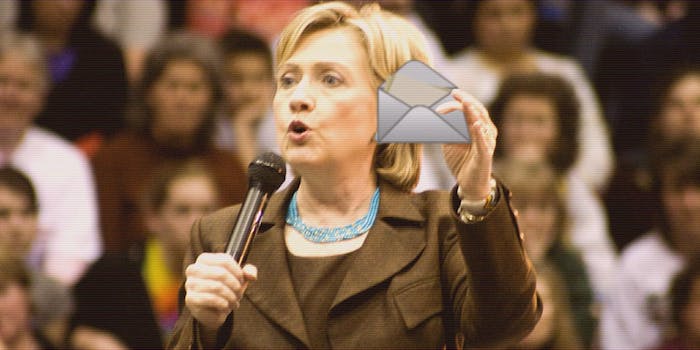 A report by the New York Times, based on information from an anonymous senior intelligence officials, says that Clinton, the current 2016 Democratic presidential frontrunner, had at least two emails that contained “Top Secret” information, the highest level of government classification, at the time.

“I am sorry that this has been confusing to people and has raised a lot of questions, but there are answers to all these questions.”

The Clinton campaign and the State Department have blamed the government classification process, saying the emails were over classified.

According to Kirby, the information may be misclassified due to a concept called parallel reporting, whereby multiple government agencies learn about a single piece of information separately and apply different classifications to the information.

“Thus,” Kirby said, “there can be two or more separate reports and not all of them based on classified means. At this time, any conclusion about the classification of the documents in question would be premature.”

After the revelation that Clinton used a personal email server located in her home in Chappaqua, New York, Clinton has come under harsh criticism from both sides of the political spectrum. Critics say that having a personal email server, instead of one issued and controlled by the State Department, was a security risk.

Clinton deleted 31,000 emails that she claimed were personal messages and turned over 30,000 work-related emails to the State Department, which is releasing the emails after a security review.

Clinton has refused to apologize for having a personal email server, but she said it “wasn’t the best choice” in a recent interview with NBC News.

“At the end of the day, I am sorry that this has been confusing to people and has raised a lot of questions, but there are answers to all these questions,” Clinton said. “And I take responsibility and it wasn’t the best choice.”

Clinton is currently cooperating with an FBI investigation to determine who sent classified information to her email account.