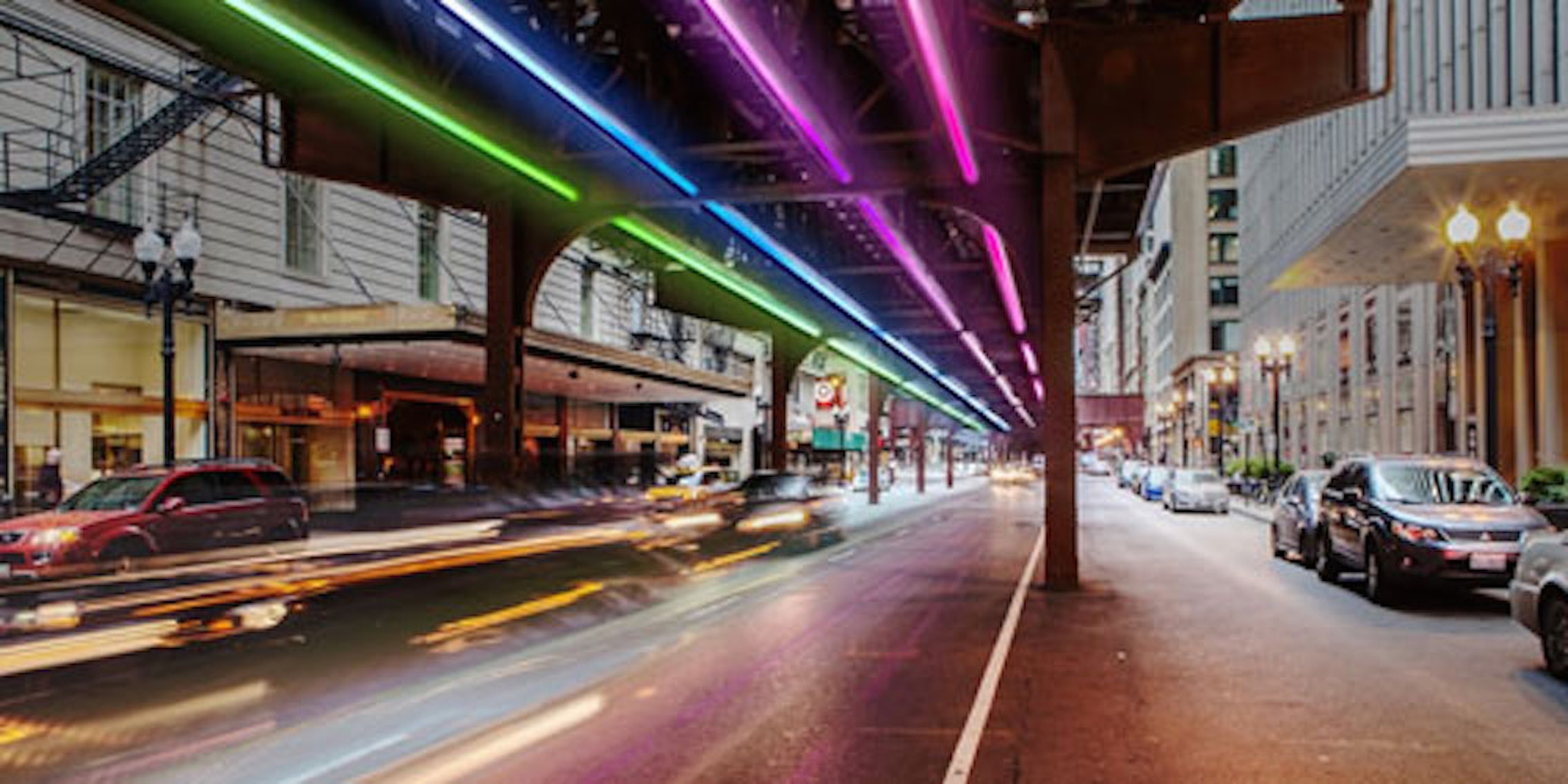 In an art gallery in Chicago, Seth Unger hurls what looks like Darth Vader’s lightsaber in the direction of his friend Jack Newell.

Only it isn’t a lightsaber, it’s a four-foot-long Philips LED light tube that alternates colors and patterns by the second. A rainbow of color lights the room—casting alternating shades of red, blue, green, and yellow—as the pair cautiously toss the fragile, elongated plastic cylinder back and forth.

The two young grassroots entrepreneurs are performing a demo of the LEDs for a photo shoot. It’s an oddly mesmerizing display, but it pales in comparison to what they have in store. In a few weeks, Unger and Newell will repurpose thousands of the LED tubes in one of the most interactive, inclusive, and vibrant pieces of public art Chicago has ever known.

The two plan to layer 5,000 of these lights in the gritty spaces under the city’s elevated subway—nicknamed “the L”—an effort that will transform the Wabash Avenue district and help revitalize their city’s urban core. The installation is aptly titled The Wabash Lights.

“It’s an open-source instrument that never existed before and we’re inviting the world to come play,” says Newell, 33, a filmmaker who has lived in Chicago most of his life and is currently working on a documentary about Haiti. “The lights are incredible. You can do whatever you want with them. It’s almost crippling to know how many things you can do. You can have sound inputs; you can have video inputs; you can have data inputs. It’s kind of endless.”

Users will have the ability to control the lights’ colors, sequences, and patterns for a period of time through a user-friendly mobile phone app that anyone in the world can access. That accessibility was a critical component of the installation. The designers wanted to involve the community in the experience and simplify a technology that was previously only available to professional lighting designers or those fluent in light-design programming languages. Now anyone from Tehran, Iran, to Havana with a mobile phone and an Internet connection can schedule time slots to become a conductor of color in the core of the Windy City.

Through the app, users can create and initiate a lighting sequence that gives the appearance of slow-moving clouds overhead, an electric rainbow, or even a design that mimics a picture of plants they found on the Internet. The sky, quite literally, is the limit.

“With the Wabash Lights, we’re allowing people to use a piece of public art to express themselves in a way that might only be understandable to them but could also be interpreted or understood by the tens of thousands of people traversing Wabash Avenue everyday,” explains Unger, a brand strategist, who’s also 33.

“They can go downtown and see their design go live on Wabash. Or, if they’re in Tokyo, they can feel like they’ve done something that’s affecting Chicago, and they can see it on the webcam and take a photo of it via the webcam, put it on their Instagram feed and post it to Twitter and feel like they have a connection to the city, feel like they did something that allowed them to touch Chicago thousands of miles away.”

The pair is working with various Chicago-based interactive companies to complete the app’s design and its coding, which will allow users to apply as many as 200 different “brushstrokes” to the lights.

“There will be infinite possibilities in what they can do and what they can program,” Unger explains. “They can go down to micro-level with one pixel and one light, or they could control the entire installation at one time.”

In a city known for its sprawling architecture and public art installations like Cloud Gate, Newell and Unger are taking an intriguing approach: They’re putting art back in the hands of the people.

“Public art is supposed to be for everyone, but it’s usually paid for by a few and created by one,” said Newell. “There’s an ephemeral nature to art. If you look at a Picasso or a Calder, or Cloud Gate or the Eiffel Tower—it’s always the Eiffel Tower—it doesn’t change. But this [the Wabash Lights] is never going to be the same. And that’s interesting.”

Wabash is not known for being a nocturnal playground. It’s nearly abandoned by twilight. By night, it’s even less welcoming; the skeletal steel silhouette of the L lingers ominously above passersby once the sun sinks over Chicago, blanketing the avenue in darkness and decreasing foot traffic. The Wabash Lights could change that.

“We want to give them an excuse to keep them downtown,” says Unger, who hopes the Wabash Lights will drive more business there, too.

The L tracks are sandwiched between State Street — a historic district rolling deep with restaurant, retail, and theater offerings—and Michigan Avenue, ripe with tourist draws such as Millennium Park, the Art Institute of Chicago, and the trendier Magnificent Mile.

“Wabash is kind of this interesting corridor for the people,” Unger says. “You have this loud, noisy, dirty, dark, pigeon-riddled elevated train tracks that local Chicagoans know and love and that’s their ride to work. … It’s the back alley that State Street and Michigan Avenue spit out onto. Wabash is a perfect metaphor for the city of Chicago: beautiful, gritty, and hardworking.”

The City of Chicago, Chicago Transit Authority, and the Chicago Department of Transportation just gave Unger and Newell permission to proceed with a beta test of the Wabash Lights. The duo raised nearly $60,000 via Kickstarter to cover its implementation. They’re hoping the beta test will go live in September or October, between Monroe and Adams streets. The test will last for about a year and iron out any technical kinks.

“For the beta test, [the challenge] is going to be the testing of this specialized piece of hardware that we’ve created and developed to prevent the lights from contacting or having to be drilled into the I-beams,” Unger says. “Those are the unknowns for us; those are the things that keep us up at night.”

If the beta test clicks, Unger and Newell are hoping to raise up to an additional $5 million through private, foundation, and corporate sources to transform an entire two blocks of Wabash Avenue into a full-fledged canvas for their rainbow-hued artistic science experiment.

“We would love to raise that money in the next 12 to 18 months,” Unger says. “We have to have those funds to be able to do this [next] installation. That’s the biggest question mark right now. So far, we’ve taken the right steps. I believe that we can be successful in doing the major installation, but $5 million is a lot different from $60,000.”

The beta test will be a living, breathing example of the Wabash Lights’ potential, allowing the public to imagine how that would scale up on a much larger canvas. If their two-block illuminated layout comes to fruition, the Wabash Lights will stretch an estimated 20,000 feet. That size would come with an annual electrical bill of $10,000, one of the many costs their upcoming fundraising campaign aims to cover. Unger and Newell are also looking at solar and wind options to power the project.

Admittedly, Unger and Newell’s own lack of experience has been a bit of a roadblock. Neither are installation artists or urban planners, nor are they fundraisers. But through an unflinching determination, they’ve emerged as the newest mad scientists of Chicago’s urban renewal movement.

“There’s going to be a moment when we flip the switch on this thing, and it comes alive,” Unger says.

This Daily Dot article was made possible by Heineken. The City Kickstarts editorial series has no formal relationship with Kickstarter. The project featured, The Wabash Lights, is independent and is in no way affiliated with or funded by Heineken or the Daily Dot.