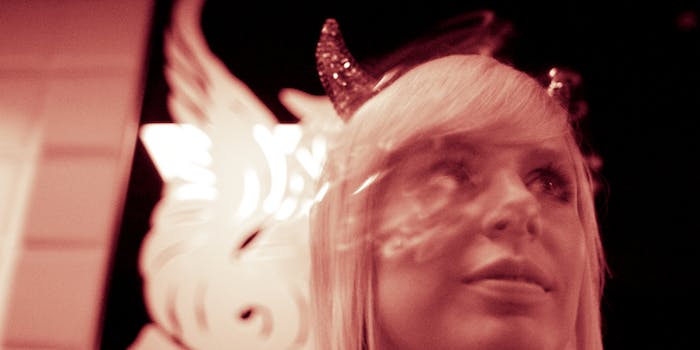 Swipe down if you're looking for a relationship, and up if you just want to go to the bone zone.

Like Tinder, HeavenlySinful is a location-based hookup app that shows you available singles in your area. The difference is that before you log onto the app, it asks you whether your mood is “heavenly” or “sinful”: i.e., if you’d like to meet someone for an old-fashioned date, or just go to the bone zone. You swipe up for “heavenly,” and swipe down for “sinful.” 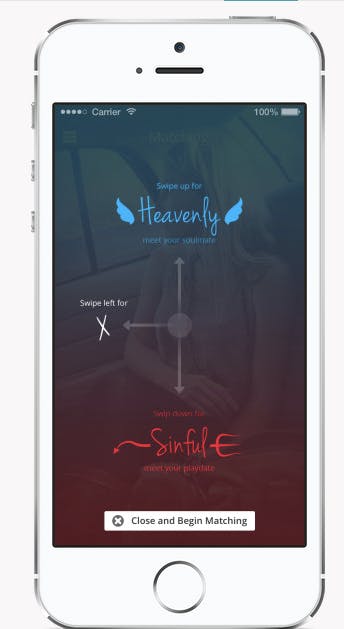 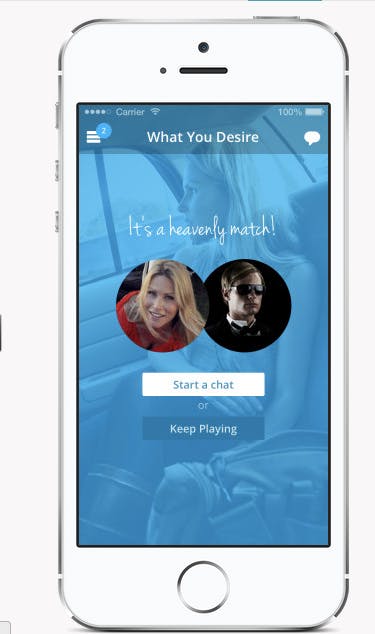 
Depending on what you’ve swiped, your profile is put on a “mood map” for people in your area to see what your intentions are (there’s no screengrab on the app, but I imagine it looks like a map that, instead of location pinpoints, uses little cartoon hearts and erect penises). As your matches come in, you can either swipe left to ignore them, or rate them individually as either “heavenly” or “sinful.” Then you can shell out in-app credits to send them video messages or “stickers” to get the conversation going.

While there’s nothing quite as boner-killing as receiving a smiley-face sticker from someone you want to go to get-down-town with, Heavenly/Sinful seems like a good idea in theory: After all, nothing eliminates the ambiguity of the online hookup, or the “where is this going/what does this mean?” conversation that inevitably ensues three or four dates later, than an app that just tells you outright what both parties’ intentions are.

But at the same time, the implications of classifying someone as either “heavenly” or “sinful” are somewhat troublesome. There’s something very Betty-and-Veronica about that enforced dichotomy, and there’s a damn good reason why Archie never ended up with either one: Because it’s a stupid idea, and people resent being put into boxes. Sexual relationships are complicated, and even if you think you’re interested in someone as either a fuck buddy or a future wife, you’ll most likely find that not only do they probably not think about you the same way, they don’t just fall neatly into one or the other category, or any category, for that matter.

Even though HeavenlySinful has positive intentions—to make online dating more honest and upfront—the uncomfortable truth is there will always be certain elements of the online dating experience that are shrouded in misunderstanding and ambiguity. And regardless of whatever direction you swipe, these ambiguities likely won’t go away overnight.