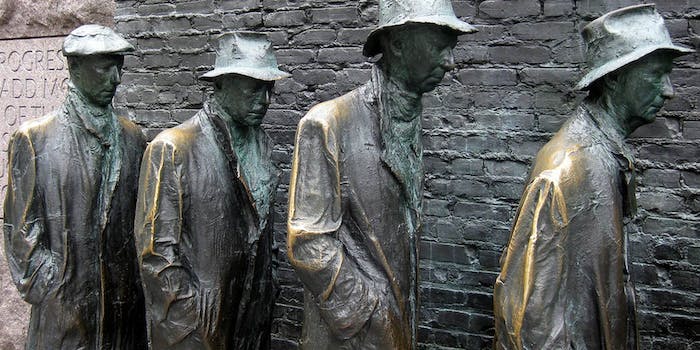 How local Obamacare sites are hurting those who need them most

While everyone's annoyed at the failings of Healthcare.gov, some citizens' lives are being drastically affected.

The debacle that was the introduction of Healthcare.gov, became one of the biggest news stories of 2013. But for those who regularly depend upon online government services to get by, it was a familiar narrative.

Faulty websites across the country continually hamper the ability of needy citizens to secure government assistance such as unemployment and food stamps. A combination of high demand and diminished financial support have forced those seeking assistance to abandon long lines at the unemployment office for equally intolerable buffering, timeouts, and crashes.

In a piece published today, the New York Times catalogues a series of substantial government IT disasters that hit the nation’s poor the hardest.

In Florida, for instance, the state has spent the last three months dealing with a host of technical problems stemming from the debut of a $63 million website for unemployment claims. The state is now scrambling to hire hundreds of employees to deal with glitches that have left tens of thousands without their unemployment checks. Similar frustrations have also been felt in California, Massachusetts, and Nevada, where they have also tried to bring their unemployment claims system into the 2010s with calamitous results.

And in October, the same month Congress held hearings to get to the bottom of the federal health insurance exchange’s botched rollout, food stamp recipients in 17 states were unable to use their electronic payment cards for a day due to computer system failure. Again, these kind of issues are not uncommon, with similar problems having previously occurred in Georgia, Massachusetts, Texas, Colorado, and other states.

Many computerized systems, designed to make the process of obtaining government benefits more efficient have been put to the test during the recession, which has greatly ramped up the demand. Unfortunately, many have failed the test, said George Wentworth, a staff attorney with the National Employment Law Project (NELP).

“What we have seen is that a lot of the old systems have been breaking down,” Wentworth told the Times. “The recession really ended up highlighting the fragile state of a lot of these systems.”

According to a 2012 study by NELP, states have seen a dramatic increase in the number of unemployment insurance applications they process. In 2007, before the recession began, 2.6 million Americans were claiming unemployment insurance. In 2012, 6.5 million were still doing so, down from a peak of more than 10 million in 2010.

But the amount of federal assistance states receive to administer unemployment insurance does not match this trend. Federal funding for unemployment claims did increased from $2.4 billion to $4 billion between 2007 to 2010, but that assistance has receded much faster than the demand. In 2012 for instance, caseloads were 155 percent higher than they were prior to the recession, yet federal funding that year was only 45 percent higher than pre-recession levels.

All this means that those seeking benefits are met with interminable wait times in front of a computer or constant busy signals from understaffed call centers.

“It’s like calling a radio station trying to get tickets,” Gary A. Grimes an unemployed construction manager in Florida told the Times.

It’s not just unemployment sites thought. In recent weeks, a number of states have reported significant difficulties implementing their own health insurance exchanges. Massachusetts and Vermont announced they would no longer being paying the contractor behind their state-run exchanges for failing to deliver usable sites. Both states used the same developer behind Healthcare.gov.