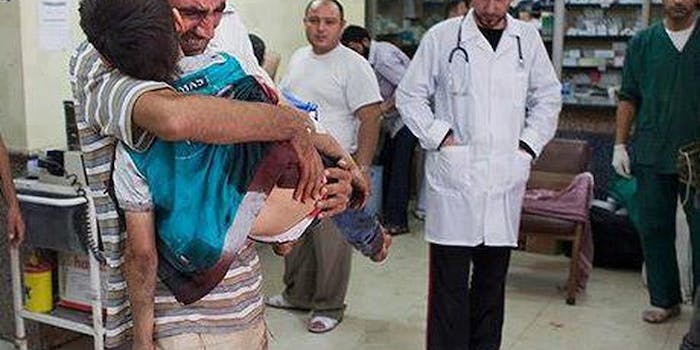 The photo, allegedly from Gaza, was actually taken in Syria and posted on a Facebook page nearly a month ago.

With more than a dozen missiles fired in Gaza by Israel and Hamas over the past 24 hours, and casualties mounting on both sides, there is no definitive way to tell who is winning the latest battle to grip the Middle East.

But in the world of propaganda, Hamas may have a slight edge.

On Wednesday night the Alqassam Brigades, the military wing of the Palestinian organization tweeted out a photo to its 10,500 followers of a man carrying an injured boy through what looks like a hospital. The tweet was originally sent by @AlqassamBrigade, included no message, and was retweeted about 100 times.

Controversy quickly erupted when other Twitter users recognized the same photo from the Syrians & Friends Paris Facebook account, where it was posted nearly a month ago.

“[T]hat picture is from Syria and does yr believability no good by you suggesting its from today. The truth is already w you,” @foto8 tweeted shortly after @AlqassamBrigade sent the photo.

Gaza has been under seige since Hamas commander Ahmed al-Jabari was killed in an attack by Israel Wednesday. Since al-Jabari’s death, Israel Defense Forces (IDF) have hit at least 20 Gaza targets with missiles “and escalated the risks of a new war in the Middle East,” the New York Times reported. About 16 people have been killed on both sides so far.