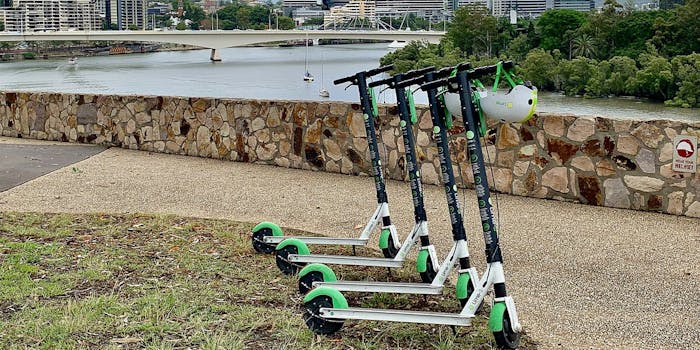 'It's not smart, it's not funny, and is akin to changing a ringtone.'

Numerous electric scooters from Lime have been taken off the streets in Australia after reportedly being hacked to make sexual and inappropriate remarks at riders.

As many as eight e-scooters, which are currently being trialed in Brisbane, had their audio files replaced by an apparent hacker.

In video posted to Twitter Monday by a local news station, a group of scooters can be heard making numerous statements, including “Don’t take me around, because I don’t like to be ridden.”

Another video featured by Gizmodo shows a Lime scooter making a more sexual comment when approached by a potential customer.

“Okay, if you’re going to ride my ass then please pull my hair, okay?” says a voice from the scooter’s voice box.

In a statement to the Brisbane Times, Lime’s Queensland public affairs manager, Nelson Savanh, decried the incident as unfunny and harmful.

“We are aware that eight Lime scooters in Brisbane have had their audio files changed by vandals recording over the existing audio file with inappropriate and offensive speech,” Savanh said. “It’s not smart, it’s not funny, and is akin to changing a ringtone.”

Lime has thus far not shared any details on how and when the audio files were replaced.

“It’s disappointing that someone has taken this opportunity to poke fun at members of the community in a hurtful way,” Savanh added.

Whether or not the current scooter trial will become permanent now depends on the Brisbane City Council.

The alleged hack is not the first problem the electric scooter company has faced in Brisbane. Other scooters were taken out of circulation earlier this year after a firmware glitch caused the front wheels to lock up unexpectedly, resulting in several customers being injured after getting launched over the handlebars.

Lime was also forced to recall more than 2,000 scooters in the U.S. late last year after a manufacturing defect saw some battery’s smoldering and even catching fire.