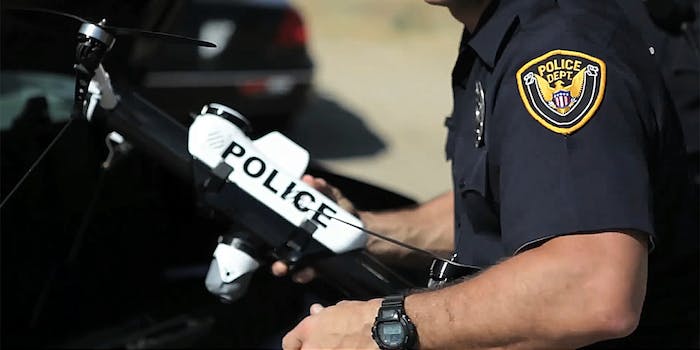 Every time a mass shooting occurs in America, gun owners and supporters are blamed for the tragic violence. This month’s Parkland school shooting in Florida was no different. Gun control advocates immediately began calling for stricter gun control laws in America. They won’t get far, though: More than 300 million guns are floating around our 50 states, and the number is unlikely to be reduced anytime soon, whether by law or not.

Might there be another way to have so-called “gun control” and still have the freedom to have 300 million or more guns? The answers lie in radical technology. In the recent Las Vegas massacre, a lone shooter from the 32nd floor of a hotel room shot and killed 58 people over approximately 10 minutes at a nearby music festival before police could stop him. Had an armed police drone—or at least a security drone with a smoke bomb or flares—been able to get to the shooter’s broken hotel windows from the music venue, dozens of lives might’ve have been saved. The distance from the shooter to the victims was only about 300 yards. Drones can fly 120 miles per hour and could have likely reached the shooter’s room in less than 30 seconds.

Using GPS and custom AI algorithms that detect gunfire bursts and explosion sounds from weapons, a waiting police drone could have found and confronted the shooter in probably less than a minute. It could have exploded a nonlethal smoke bomb in the room of the shooter or directly attacked the shooter himself with weapons.

Drones can also be led to exact locations to stop shooters by specialized smoke alarms that sense gun smoke, sending out GPS coordinates to where the shooting is coming from, or they could be notified through smart building technology built into windows and doors that notify authorities when they’ve been tampered with or broken. The Las Vegas shooter broke two of his hotel room windows to shoot out of, but no one knew until the shooting began.

Much of this technology is essentially here, and the U.S. military is on the cutting edge with its armada of drones and drone tech. Citizens that desire gun control ought to instead insist the government ask its drone-making partners like Boeing, Lockheed Martin, and other contractors to their products into public protection devices—rather than using them for far-off wars. Even better, private companies like GoPro could help jumpstart the personal security field of drones to help halt terrorism and mass shootings in America.

In the future, all public spaces, schools, and events should consider having terrorism-deterrent drones to protect its citizens—both inside and outdoors. This kind of protection is culturally and institutionally no different than a fire alarm, a fire extinguisher, and the fire department—something that dates back two centuries in America. Even libertarians like myself can get behind it.

Beyond drones, there’s gun-surveillance technology. Already, police have the ability to see through walls. Why don’t public spaces and schools have special viewing technology that easily registers metal-shaped objects from afar? It’s not that hard for a special camera or electromagnetic sensor to detect a hidden metal L-shaped handgun-like object or a long metal rifle in a duffle bag. If a weapon is detected in the camera or sensor, it could send a message to a computer to sound the alarm to alert security and electronically lock doors, whether on a campus or in a place of business or government building. The alarm could also immediately notify authorities and launch that newly acquired security drone to check out and possibly stop an imminent tragedy. Some companies are working on this already, and major casinos in Las Vegas are now experimenting with electromagnetic gun surveillance technology in their lobbies.

People are rightfully distressed at being spied upon and the use of surveillance tech, especially since it’s becoming so powerful and pervasive. But a modified thermal camera or electromagnetic sensor need not be able to identify people or their faces. Rather, it could be programmed to only detect weapons and nothing else.

The gun control question in America has been escalating in intensity for decades. It’s true that there are about as many gun deaths as driving deaths now, which is unfortunate. I believe something should be done about it—and that something involves gun control. But the control need not come from limiting sales and ownership of guns, but rather from limiting criminals being able to carry out violence in public or private spaces. That can best be done by innovative technology—some of which already exists and much more of which can be quickly developed.

Zoltan Istvan is a technologist and a Libertarian candidate for California governor.