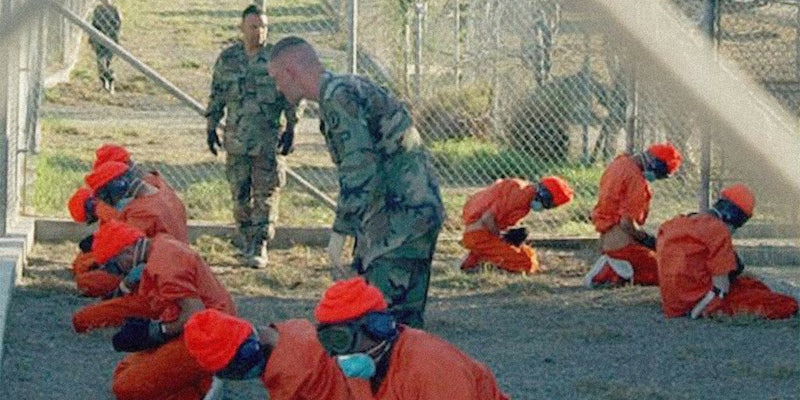 What is the future of Guantanamo Bay?

More people will probably never be sent there.

During his State of the Union address last week, President Donald Trump said that he would “re-examine our military detention policy” and that he had ordered Defense Secretary Jim Mattis to develop a plan to “keep open the detention facilities at Guantanamo Bay.”

Many on the right and the left viewed this as a departure from Obama-era policy, but this isn’t exactly true. While Trump’s language regarding the military prison inside of Guantanamo Bay Naval Base is certainly a shift, experts expect little to change. There is good reason to believe that Trump will run into many of the same difficulties in broadening the use of the base that President Obama had to contend with in his attempt to close the prison.

“This is much easier said than done,” Robert M. Chesney, a University of Texas, Austin, law professor told the New York Times. “Practically, not much is expected to change with Trump’s new order,” said Lee Wolosky, a State Department envoy, when speaking to the Washington Post. These views reflect the consensus among pundits and diplomats, who have seen Guantanamo Bay become a political hot potato that America can’t seem to shut down, but also has no practical value to the United States.

As currently constituted, Guantanamo Bay is little more than a symbolic money pit. While the prison currently has 1,700 staff between their military and civilian employees, only 41 prisoners remain there. At its height, the base only ever housed under 250 prisoners. Even the man responsible for creating the prison, President George W. Bush, began to see the prohibitive cost of keeping the $440 million a year detention center open for very little return on investment. He started shipping out prisoners before his term ended, and Obama refined the military review boards necessary to expedite releases, drastically reducing the number of prisoners held there.

Guantanamo Bay’s prison camp was opened in 2002 as a place to detain and interrogate terrorists captured on the battlefield in Afghanistan. While that term “battlefield” was somewhat broad then, it is even more difficult to define a battlefield today, as the United States remains engaged in a sprawling, amorphous struggle against ISIS and terrorism in general. But, even when the war was a bit more contained, Gitmo was viewed as a failure. While the hope was to detain, in then Defense Secretary Donald Rumsfeld’s words, “the worst of the worst,” the prison ended up populated largely by footsoldiers and low-level operators, who were then imprisoned at an exorbitant cost.

You can’t even say much in terms of violence that was prevented by detaining these “worst of the worst.” The Office of the Director of National Intelligence released a report that only 17 percent of 728 detainees who have been released have been “confirmed” to participate in further militant activity of any kind. Those numbers look even worse considering that those released under Obama had significantly lower numbers of re-engagement after his administration overhauled the release review process.

When Obama attempted to shutter Guantanamo Bay (a struggle he began on his second day in office), he was often working at cross-purposes with Congress. The same will be true of Trump. Trump can expect resistance from Congress because it is has proven incredibly difficult to get prisoners out of U.S. custody once they arrive at Gitmo. Often, a prisoner’s home country won’t want them back, and other countries, of course, would be reluctant to take them in. More prisoners likely means indefinite costs to the U.S. legal system. Just as Obama’s plans to shutter Gitmo were thwarted with the Republican wave of 2010, Trump’s plans could be similarly stymied if the Democrats regain control of even one chamber in the fall.

Trump could even face resistance from a Republican-held Congress. While the war against al-Qaeda and the Taliban was unconventional, the struggle against ISIS has been even less defined. Last year, American citizens woke up to the news that U.S. troops had been killed in Niger as a part of that fight, and most American citizens didn’t even know we were in Niger. To bring ISIS prisoners to Guantanamo, Trump will likely need to lean on Congress to broaden the A.U.M.F. (Authorization of Military Force) to include the sprawling, multi-continent war against the Islamic State. If Trump doesn’t do this, it would potentially allow judges to rule against the detention of IS prisoners at Gitmo. Even some vulnerable Republicans may be reluctant to vote for expanded military operations as election season approaches.

Trump’s timetable for shifting his Gitmo policy doesn’t bode well against the ticking clock of the midterms. He has given Mattis a three-month timetable to come up with a new plan, but even that seems ambitious. Mattis and fellow former military man Chief of Staff John Kelly have been reportedly reluctant to move on Gitmo. The New York Times wrote that Mattis has been “reluctant” to send new detainees to Gitmo, and that he views the prison as an “unnecessary headache for the military.” Kelly seems to feel similarly: an executive order was being prepared for Trump to sign regarding expanding detention, and it was withdrawn when Kelly arrived in the White House. With only nine months until the election, the window for big moves is already closing.

The president will also likely face resistance from abroad. While President Trump has shown a willingness to go against the international community on a variety of issues, from the Israeli capital to climate change, it should be noted that the United States won’t receive much international cooperation in expanding the prison, as many countries view it as a human rights abomination. Previous presidents have eyed other countries as potential partners in the transportation and detention of Gitmo prisoners, and other countries have wanted no part of it. Homer Venters, director of the programs at Physicians for Human Rights said in a statement last week, “The facility is a symbol of U.S. torture and injustice known around the world. It represents a unlawful, immoral, and harmful regime of indefinite detention and should be shuttered immediately.” Many international organizations have offered similar statements on Guantanamo Bay.

Guantanamo Bay is an incredibly expensive prison with poor results and few prisoners currently in custody. The grounds on which future detainees could be taken there are murky at best, and there is no concrete path through the judicial system for them once they arrive. Prominent members of Trump’s staff are quietly opposed to Gitmo’s expansion, and such a move would meet with firm resistance both at home and abroad.

The general consensus is that this order is little more a symbolic gesture to Trump’s base, not unlike his promised border wall. When you dig into the details, its difficult to see it any other way.