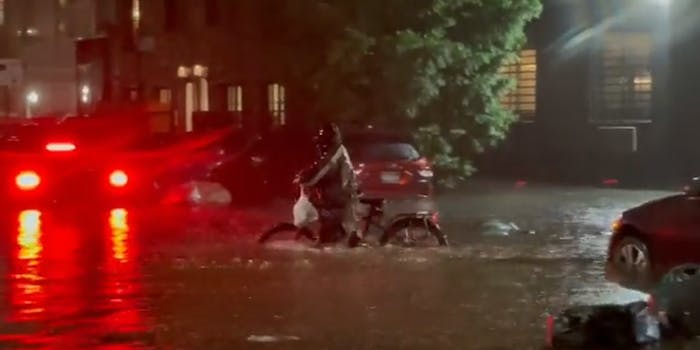 'Don't make people deliver food to you in weather like this. What the f*ck?'

An apparent Grubhub worker who was spotted wading through waist-high water to deliver food in New York City is stirring widespread debate on social media.

Footage posted to Twitter on Wednesday shows the employee trudging alongside a bicycle in Brooklyn amid large-scale flooding linked to Hurricane Ida.

“And through it all! @Grubhub delivery still out there bringing your dinner,” @UnequalScenes tweeted.

Many Twitter users responded to the clip, which has been seen more than 4.7 million times, by expressing outrage over the fact that someone had felt it necessary to order food.

“Hi folks, I promise you’ll be okay if you just make yourself a PB&J for the night,” @DatFirePrincess wrote. “Or even if you eat the peanut butter straight from the jar. Don’t make people deliver food to you in weather like this. What the fuck?”

“Shame on the person who made the order, and bigger shame on grubhub for accepting the order. The poor delivery person doesn’t deserve this,” another person added.

The viral video also led many to discuss the current state of the economy as well as poverty in modern day America.

“Forcing your way through dangerous floodwaters in the middle of a storm to deliver someone a burger is the reality of the poverty and precarity at the heart of the gig economy,” @bencsmoke added.

Countless users also began tagging Grubhub to demand that the company provide better conditions for their workers. The official Twitter account for Grubhub has not responded to the viral video. The Daily Dot reached out to Grubhub via email but did not immediately hear back.

“Deliveristas putting their lives at risk to deliver food in a tropical storm are the consequences of an unregulated gig economy,” @SamelysLopez said. “It’s inhumane.”

Hurricane Ida has led to at least 15 deaths across the region and produced record-breaking rainfall across New York. Yet gig workers, many who can’t afford to take time off, continue to face not only the coronavirus pandemic but devastating weather conditions as well.

Update 3:08pm CT: Grubhub told the Daily Dot they were looking into whether the person in the video is one of their drivers and said the safety of their employees is a priority for them.