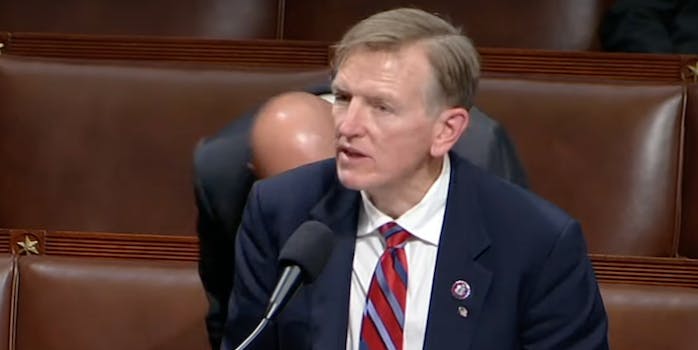 Rep. Paul Gosar censured for violent anime tweet where he kills AOC with a sword

It's the first House censure in 10 years.

Well, it’s now official. As a sitting member of the House of Representatives, you cannot tweet an anime video of you killing your colleagues. Not without at least drawing a slight rebuke.

Rep. Paul Gosar (R-Ariz.) was officially censured today by the body for his decision to tweet out an anime video where his face was superimposed on a person swinging a sword at a body with Rep. Alexandria Ocasio-Cortez’s (D-N.Y.) face on it.

The tweet, which has since been deleted, also featured Gosar killing President Joe Biden.

The House voted 223-207 to censure Gosar and also remove him from his committee assignments. The vote came mainly on party lines.

After he posted the tweet, Gosar was called out by Ocasio-Cortez, who highlighted the threats she felt from far-right members of Congress, who have singled her out with their ire.

Ocasio-Cortez, in a speech on the House floor before the vote, said that a member of Congress flippantly tweeting threats “trickles down” and inspires violent actions in real life.

In defending himself, Gosar compared his plight to that of Alexander Hamilton’s for some reason and said that “no threat” to Ocasio-Cortez was intended.

Gosar is the first member of the House to receive a censure since 2010, when then-Rep. Charlie Rangel (D-N.Y.) was censured for financial malfeasance.