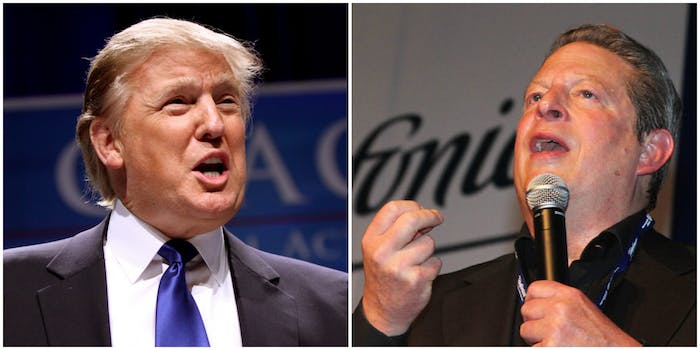 Gore made the comments in a climate change video he made with LADbible, an entertainment website, ahead of the release of his new film An Inconvenient Sequel: A Truth to Power.

When the interviewer asked Gore if he had “one piece of advice” for Trump, Gore didn’t mince words.

Almost immediately, Gore answered: “resign” and slowly shook his head up and down.

Most of the interview focuses on climate change—something Trump has repeatedly called into question. The president also announced that the United States intends to pull out of the landmark Paris Climate Accord, a global effort to reduce emissions.

“We’ve never had a president who’s deliberately made decisions the effect of which is to tear down America’s standing in the world,” Gore said.

Gore visited Trump shortly after the election to discuss climate change, but last month told Late Night host Stephen Colbert that he had soured on the president’s ability to combat climate change.

“I went to Trump Tower after the election,” Gore said. “I thought that there was a chance he would come to his senses. But I was wrong.”

This isn’t the only pointed statement Gore has made in recent months. In July, Gore joined several prominent Democrats and called for a single-payer healthcare system, a system where taxes pay for people’s basic healthcare costs.

You can watch all of Gore’s interview with LADbible here: