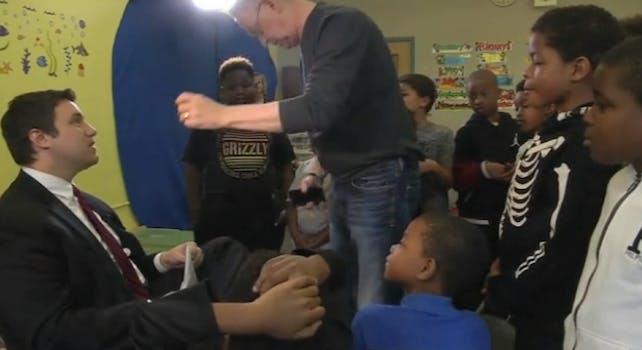 Republican congressman storms out of interview after just 2 questions

Iowa Rep. Rod Blum didn't like questions about his decision to ask for IDs at a town hall event.

The Republican lawmaker, who represents the state’s first district, abruptly walked out of an interview with a local Iowa news station after just two questions.

The station said Blum agreed with an interview with KCRG-TV’s chief investigative reporter Josh Scheinblum, but the congressman left mid-interview despite sitting in the middle of a gaggle of children that the congressman insisted be there, according to TV9.

The first question was simple—what was Blum expecting from his upcoming town hall event?

But Blum seemed to take issue with Scheinblum asking direct questions about the congressman’s upcoming town hall—where people will apparently need to show IDs in order to be let in. Town halls have been contentious for many GOP members of Congress since President Donald Trump‘s election.

Scheinblum asked why the decision to require IDs was made. The congressman responded: “We want people from the first district to be at our town halls, we don’t want people from outside of the first district,” Blum said with a slight chuckle. “We don’t need people from Chicago there or Des Moines there or Minneapolis there. I don’t represent them—they should go talk to their representatives and their town halls. I don’t know why they would want to be at one of my town hall meetings to start with.”

Scheinblum countered with the idea that Blum represents “all Iowans” because of the decisions he makes in Congress. Things spiraled quickly after that.

I asked @RodBlum why he's requiring IDs at his Townhalls, he stood up ended the interview. " Interview"lasted all of 2min. Top @KCRG pic.twitter.com/GoTZJCTxqf

Blum said he didn’t “represent all Iowans,” adding that it was like someone living in Dubuque and wanting to vote in Iowa City during the election.

“Would you still take donations from a Republican in Iowa City?” Scheinblum asked.

That was the last straw for Blum.

“I’m done,” he said. “This is ridiculous. He’s going to sit here and just, just badger me.”

The children sitting next to Blum looked awkwardly at the two men during the exchange before shuffling out of the room as the congressman continued to mutter about the interview being “unbelievable.”

After leaving the interview, Blum met an audience who wasn’t very happy.

The crowd, which was “rowdy” and “infuriated,” according to the Washington Post, was upset with Blum’s vote for the American Health Care Act, the House’s replacement bill for the Affordable Care Act, former President Barack Obama‘s signature healthcare law.