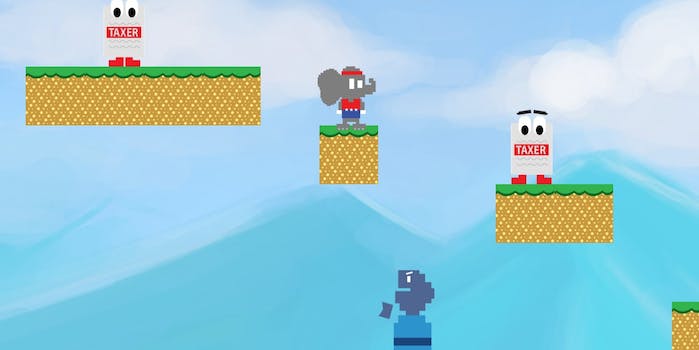 The New York Times gives the Republican Party a 64 percent chance of taking control of the Senate after this fall’s midterm elections, but the National Republican Senatorial Committee (NRSC) isn’t taking any chances.

On Monday, the NRSC launched Mission Majority, a Web-based video game that lets hip young kids battle the Democrats to claim a majority in the upper chamber.

The NRSC’s game is a fairly simple four-level platformer. Set to a charmingly antiquated MIDI pop track, the game sends players on a hunt for golden keys that will “unlock the Senate” for Republicans. You play as “Giopi,” an elephant on a mission… to a majority in the Senate. (Having fun yet?)

“Each key represents helping a Republican campaign get more volunteers,” the game tells you at the beginning of Level 1. “With every key collected, you win more points.” 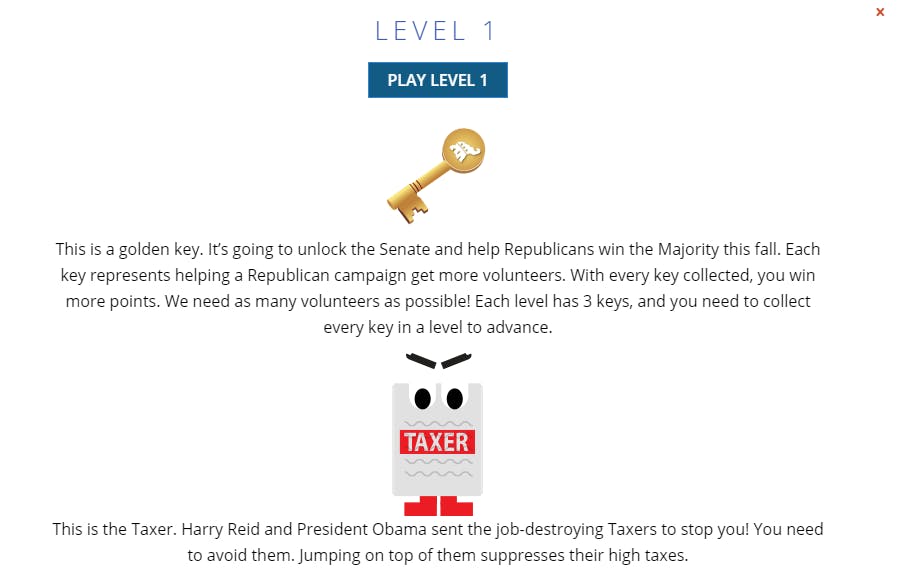 Confronting the valiant hero at every turn are “Taxers”—angry-looking, heavy-stomping Democratic minions who can injure you if you bump into them. It’s easy to defeat them, however: “Jumping on top of them suppresses their high taxes.” 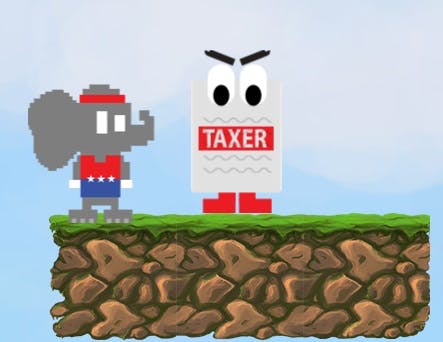 
In Level 2, you meet the Mudslinger. These liberal agents “hurl false and empty rhetoric,” and the only way to “mute their misleading words” is to—you guessed it—jump on top of them.

Each time you stomp a Taxer or a Mudslinger, the game plays a damning quote from a prominent Democrat. Highlights include President Obama saying, “Not even a smidgen of corruption,” “We are the ones we’ve been waiting for,” and, of course, “You didn’t build that.” Hillary Clinton gets a few lines, including her famous utterance from a hearing on the Benghazi affair, “What difference at this point does it make?” (Clinton was referencing the Republicans’ dogged attempts to get her to admit responsibility for the debacle.)

In a nod to the 2014 Senate map, the game throws in a quote that is obscure to anyone besides Iowa Republicans.

The quote comes from Bruce Braley, the Democratic congressman who is running for the Senate seat being vacated by fellow Democrat Tom Harkin. In April, Braley said at a fundraiser that if the Republicans took over the Senate, Iowa Republican Senator Chuck Grassley, the current ranking member on the Judiciary Committee, would become the panel’s chairman.

“You might have a farmer from Iowa who never went to law school, never practiced law, serving as the next Chair of the Senate Judiciary Committee,” Braley said, in a speech that was surreptitiously recorded by a Republican group. The comment immediately went viral in Iowa politics.

The game only includes the first portion of the quote: “You might have a farmer from Iowa.”  According to the current Huffington Post polling average, Braley leads Republican candidate Jodi Ernst 44.9 percent to 43.7 percent. 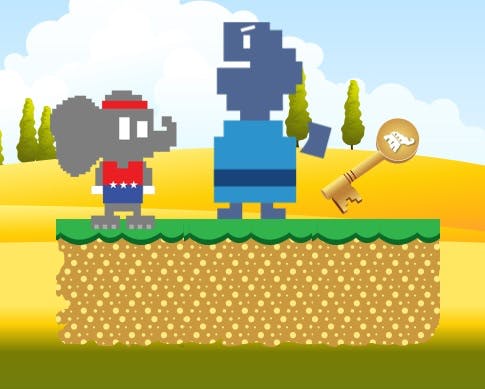 In this reporter’s experience, Mudslingers were no more threatening or difficult to dispatch than Taxers. In fact, Mudslingers at least stood still, whereas you often had to time your jumps correctly to land on a platform in time to jump on a roving Taxer. The game doubles down on this aspect in Level 3, where narrow platforms and spaces too tight for wanton jumping require you to carefully control your leaps.

In level 4, you are confronted with six switches that you must flip from the dreaded donkey to the exemplary elephant, representing six blue states turning red.

For the record, the Times currently considers five states highly competitive: Alaska, Iowa, Colorado, North Carolina, and Louisiana. Arkansas, Georgia, and Michigan are also listed as competitive, but the Times assigns such high changes to the Democrats in Michigan, and to the Republicans in Arkansas and Georgia, that the chances of any of those states switching parties are relatively low. The Republicans think they have a good candidate in Michigan in the form of Terri Lynn Land, so that may be the sixth targeted seat represented by a switch in the Mission Majority game. 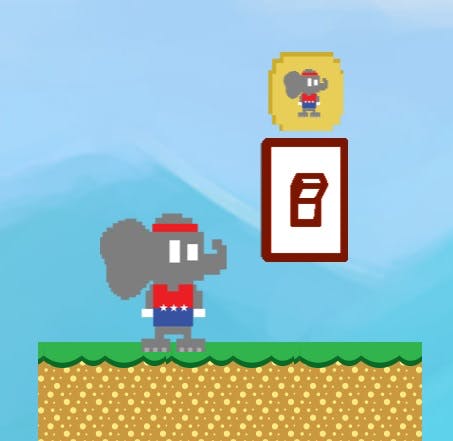 When you’ve flipped five switches, you’ve turned the Democrats’ 55-seat majority into a 50-50 tie. The game helpfully reminds you that, in the event of a tie in the Senate, the Vice President, who also serves as President of the Senate, casts the tie-breaking vote. Don’t forget that last switch! You wouldn’t want to give Joe Biden any real power, would you?

Victory is sweet. The game informs you that the majority you fought to so hard to build “will fight against the red tape and regulations holding our country back.”


Savor your victory in the GOP’s Mission Majority game. The real midterm elections are only just heating up.