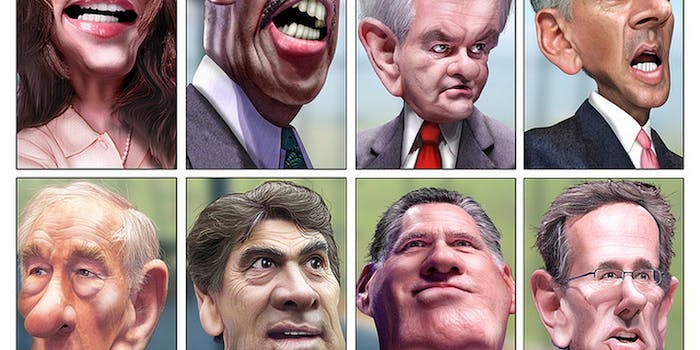 If you expected to see an intellectual discussion on Twitter during tonight’s Republican presidential debate, you were sorely disappointed.

If you expected to see an intellectual discussion on Twitter during tonight’s Republican presidential debate, you were sorely disappointed.
And if you were one of the thousands of people who tuned into MSNBC hoping to see a serious debate about the economy, health care, and public security, you probably felt the same way.

For more than an hour and a half, eight presidential hopefuls proved that large live debates are a place for candidates to poke at one another, push their own agendas, and dodge the real issues.

Former Utah Gov. and former U.S. Ambassador to China Jon Huntsman used every opportunity he could get to remind people about his seven kids (some of which are on Twitter) while businessman and former talk show host Herman Cain was all about his “999” plan for economic growth.

Gingrich even shook his finger at the liberal media, claiming that its sole purpose is to create a rift in the Republican party.

Rep. Michele Bachmann of Minnesota was pretty much a no-show at tonight’s debate but that didn’t stop Twitter from being flooded with thousands of jokes at her expense.

The hashtags #GOPDebate, #tweetthepress, and #reagandebate were trending topics, collecting more than 3,000 mentions combined, according to statistics from Topsy, a social media search engine.

Two comedians in particular, Andy Borowitz and Patton Oswalt, live-tweeted the debate and pulled no punches.

“I don’t blame Bachmann for not believing in evolution. It’s really let her down,” Borowitz tweeted.

“I feel like the actual Republican candidates are tied up in a Scooby-Doo warehouse somewhere,” Borowitz tweeted.

“There are people out there who want to kill us.” — Newt Gingrich, America’s Drunk Uncle,” Oswalt tweeted.