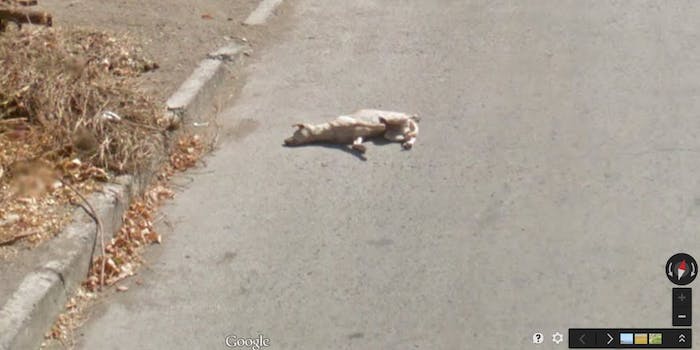 Did Google’s Street View car run over this Chilean dog?

Google Map’s Street View has brought us a number of embarrassing mishaps and nightmarish locations, along with a few alleged dead bodies. It’s been a year since Street View aided in the rescue of an adorable puppy named Sonya. But one dog who had a run-in with a Google Car recently may not have met such a happy fate.

The latest Street View mystery comes to us from Quinta Normal, a lush corner of Santiago Province in Chile. As discovered Monday by Hacker News and brought to us via Business Insider, the Street Car may not have been on a mission of mercy.

As you can see on the Google Street View map, a tan dog appears to be frolicking on a dusty street—directly in the path of the Google car. A quick push forward, and we discover…. suddenly the dog is gone.


Although it’s common for Street View to simply glitch and pixelate parts of the picture like quickly moving animals, it’s also a possibility that the dog is… well, under the car.

Another click forward reveals a disturbing sight: once the camera has passed the area where the dog was, we can see it lying in the road—and it doesn’t look happy. Maybe it’s just lying in the sun? The person in the background doesn’t seem too concerned.

And there is some cause for hope. A few feet further down the street, a look back seems to indicate that the dog has changed position slightly and could be simply sunning itself on the pavement. What do you think? Is it a happy dog playing in the sun, or an injured pup thrashing about in need of attention? Judging by the number of sad emoticons on r/Chile yesterday, most people thought the dog was a goner, but we live in hope.

Granted, it wouldn’t be the first time the Internet looked at Google maps and saw dire things, like the time it decided (falsely) that a Google Street View car had run over a donkey in Botswana.

Thankfully, the donkey survived that encounter, and hopefully so did the little puppy in the images above.