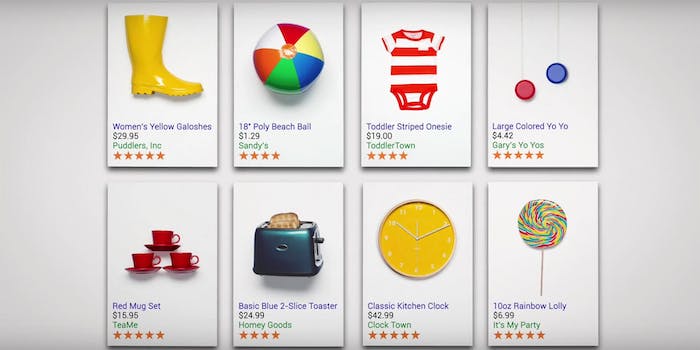 The error was corrected by Tuesday afternoon.

An apparent error in Google Shopping, a service that compares prices on goods from thousands of online retailers, removed results this week for a wide range of search terms related to firearms. The stricter search algorithm was discovered by social media users this week and picked apart on Twitter for flaws that blocked results for “Guns N’ Roses” and “water guns,” according to Business Insider.

In a statement Tuesday, Google said it is “working to address the issue” and is not implementing any changes to its Google Shopping policy. Shopping search results appeared to be back to normal by Tuesday afternoon.

Before the issue was corrected, Twitter users were in a frenzy over gun-related search results on Google Shopping. Searches for products including household and craft products like nail guns and glue guns yielded the message, “Your search did not match any shopping results,” according to the Telegraph.

Even wine lovers couldn’t find search results for their favorite burgundy tipple because the word “burgundy” contains the word “gun.” Ditto for fans of the anime series Gundam.

Wow, the brilliant minds at Google have literally banned any shopping search results containing the word gun. Hope you guys don't like anime.

THANKS FOR KEEPING OUR STREETS SAFE MARK pic.twitter.com/9um7jF2GUW

One user pointed out that Google Shopping was showing results for arsenic and flamethrowers but not music from the Sex Pistols. These results appeared to stay the same even after Google corrected for its “gun” search error.

The fluke with gun-related search terms came just days after another error allowed Google Shopping search results for AR-15 bump stocks—and as the country is embroiled in a debate about gun control. In a statement on Saturday, Google said the bump stock results were removed following customer complaints.

Thank you for flagging. This was a mistake and should not have happened. Due to a human error, a handful of Shopping results for bump stock appeared. We immediately removed those results as they violate our policy.

Google’s policy on merchant items states that it does not “allow the promotion of some products that cause damage, harm, or injury,” including explosives, guns, “dangerous knives,” and recreational drugs.

Google made changes in its search bar to move away from results associated with weapons as early as 2012, according to Forbes. Google Shopping announced in late May of 2012 it would be banning results related to firearms and other products deemed to not be “family safe.”

Update 6:23pm CT, Feb. 28: Google confirmed in a statement to the Daily Dot that the company has not revised its merchant policy.

“We are experiencing an error in our Shopping results and we are working to address this issue, but we have not changed our policy on the promotion of guns, gun parts or gun components,” Google said.